Maybe I should explain. 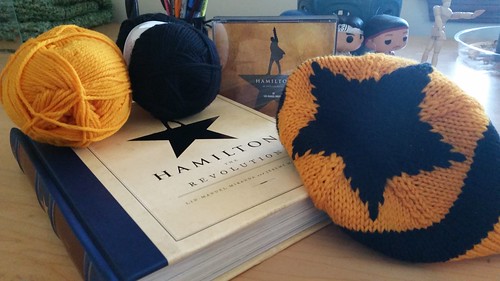 Mr. Lin-Manuel Miranda, if I can be frank and weirdly honest, I have decided, for some reason, that part of my mission in life is to create handmade (and often hand-designed) knitted objects for people that inspire me. I made David Sedaris an owl. I made Eddie Izzard a squirrel. (Whether he ever received it is another issue entirely.) An eggroll cat toy for Joy the Baker. A Reading Rainbow scarf for LeVar Burton. And then, most recently, some really aggressively patriotic hats for Chris Evans and Hayley Atwell. 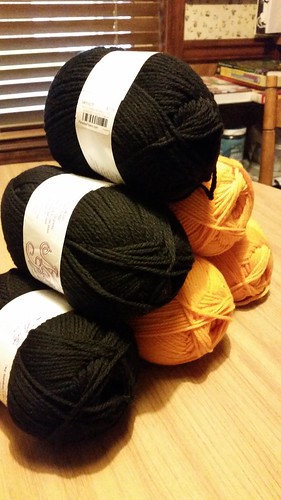 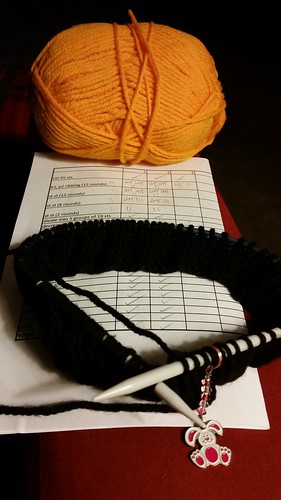 I can’t really explain why the urge to do this initially took hold, but I’ve come to feel like this is my way to express how much something that someone has done/is doing moves me. While experiencing the creative works of others, I often have some strange feelings of ineffectualness mixed in with my enjoyment and awe. Almost like, it’s impossible for me to love things deeply without being somehow slightly saddened that I didn’t get to be a part of them. So, making something heartfelt with my own fingers helps me to feel creative and part of the process, while also covering people who deserve it in handknit love. Make sense? 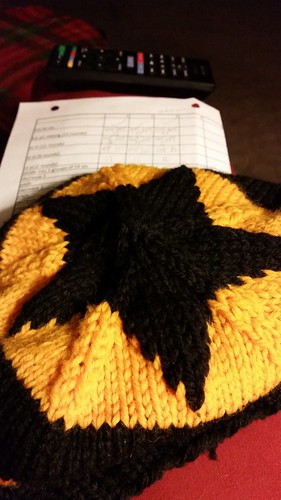 Anyway. I started out my professional life with a degree in theatrical lighting and scenic design from Carnegie Mellon University (proud alma mater of two of your castmates, the always amazing Leslie Odom, Jr. and Rory O’Malley [they graduated the year before me, actually]), and I thought that theatre was always going to be a part of my life. And it was, for a while. I worked in corporate theatre. I was the designer for a very small theatre company in Colorado that has since gone on to have quite a bit of success without me. It didn’t work out the way I thought it would, and I moved back home fairly aimless until I found nursing. 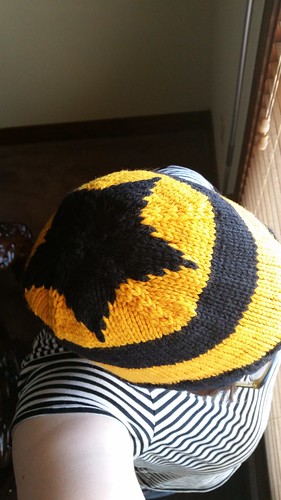 I work as a pediatric nurse in a very busy hospital, helping children with kidney problems, cardiac issues, and traumatic brain injuries. I work night shift and exhaust myself all the time, but I really do love my job. That is, unless I’m thinking about the life that I somehow missed in theatre, despite my fancy degree and head full of big ideas. The creative outlet that didn’t pan out somehow.

And instead, I knit. 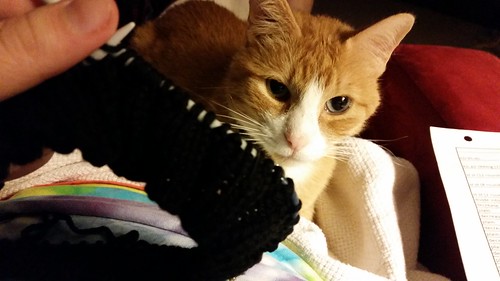 I cover people that I love and admire with stitches formed over countless hours that would otherwise be wasted sitting around and eating crackers and watching The Wonder Years on Netflix. (Who am I kidding? That show is awesome. I watched nearly the entire thing while making these hats, plus lots of Top of the Lake and Amadeus.) 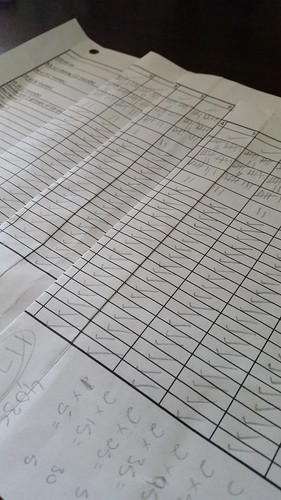 117,015 stitches, to be exact. That’s how many stitches it takes to make enough hats to cover not just your head, but the heads of everyone in the cast of your brilliant show Hamilton (at least according to the list inside the soundtrack, but if you need more, just let me know!) to show you guys how much I care about what you do. I love musical theatre, and particularly your show, so much that it makes me ache inside a little. I scream-sing in the car, simultaneously loving the wordplay and feeling that twinge in my gut because I couldn’t be a part of it. 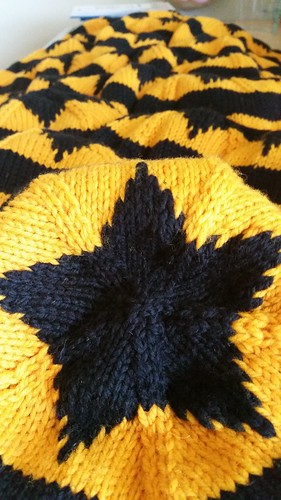 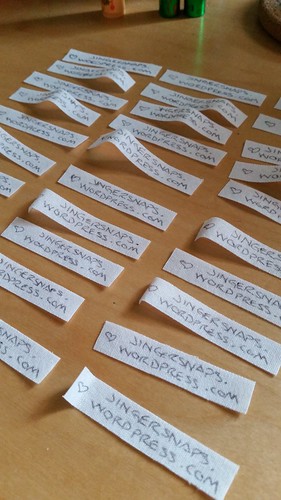 So, I’ll be at the matinee show on Saturday, June 11th with these hats, knit with nothing but love and affection for you and all that you do, trying not to be too awkward, if you’ll have them. I’ve been told that giving them to the house manager is probably the best way to make sure you’ll get them. Let’s hope that’s true. 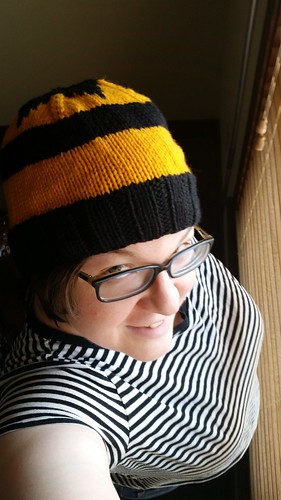 Thank you, Mr. Lin-Manuel Miranda, for making a piece of art so lovely that it makes stitches leap from my fingers. I hope that these small tokens return part of the favor.

Knitters? Want to know the specifics here? I bet you do! 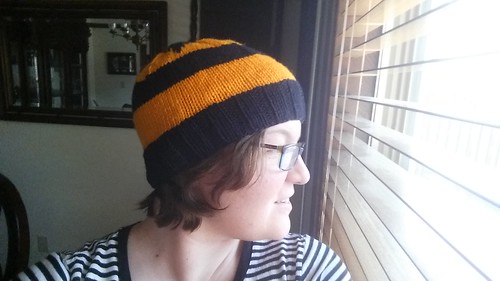 These Hamilton hats were knit up using my very own Oh Captain, My Captain hat pattern, cleverly tweaked (if I do say so myself) to resemble the Hamilton logo. This version is knit up in Brown Sheep Nature Spun Worsted, in the colors Pepper and Goldenrod. 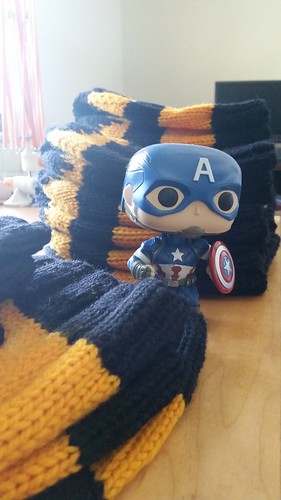 I think Steve might be a little jealous that these came out even cooler than he and Bucky’s colorways. Almost looks like…bumblebee roller derby? That sounded cooler in my head. 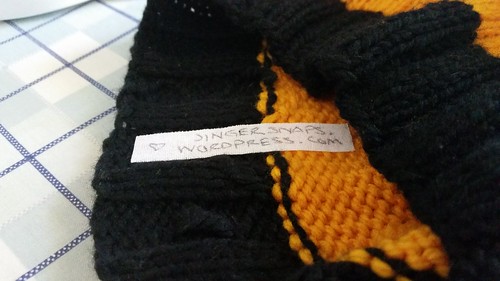 I got so freaking good at knitting these hats that I was averaging slightly less than 6 hours per hat, the last one clocking in at 4.5 hours on the dot. It’s safe to say, I really don’t want to knit any more hats ever again.

At least for about a week. My fingers are really tired.

8 thoughts on “Mr. Miranda, I Made You a Whole Bunch of Hats”