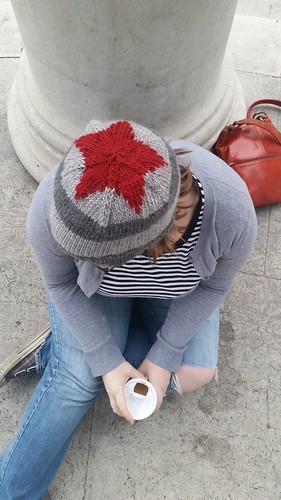 There are worse problems to have, I guess. 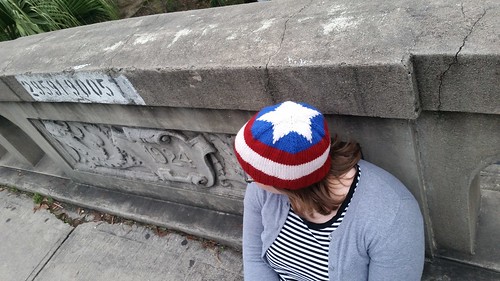 Wizard World Comic Con came to New Orleans this past weekend, and I was so ridiculously excited to go and meet Captain America himself, Mr. Chris Evans, that I was practically vibrating. The Captain America franchise is, hands-down, the greatest part of the already great Marvel universe, at least to me, and I wanted to make sure that I showed my love in knitted form to Chris Evans. 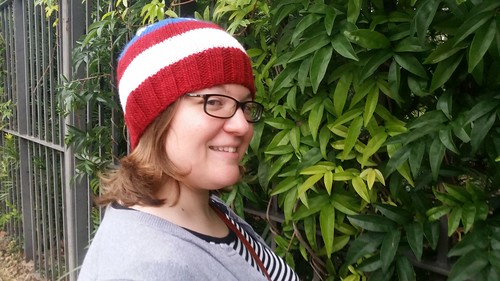 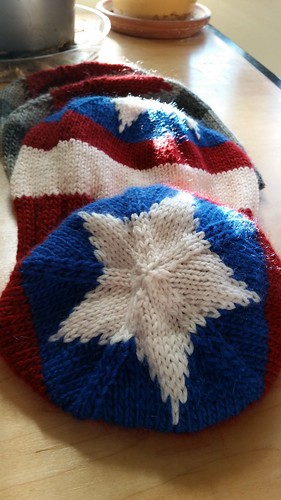 There were some mis-steps at first. 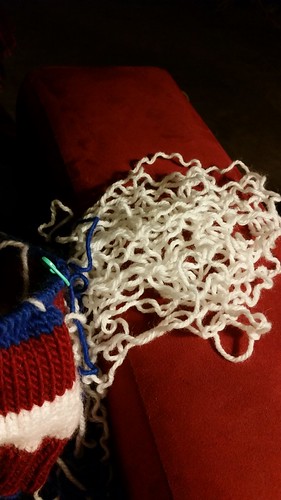 But eventually I came up with something that I felt was ridiculously nerdy, yet classy enough to wear out in public like a normal person. Simply, wearing the Captain’s shield right up on top of your head. 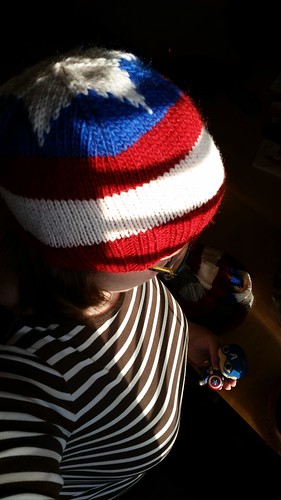 While staring down lovingly at your tiny Captain America Pop figurine, of course. No, it’s not creepy. 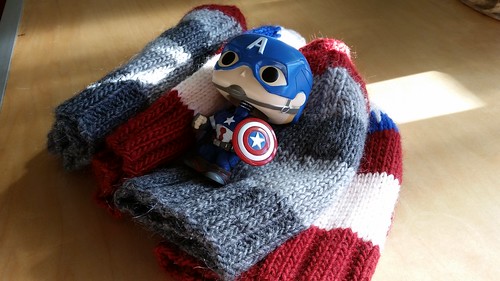 As the date neared, I realized that not only was this going to be a chance to meet Chris Evans, but that Ms. Hayley Atwell would also be there (In addition to nearly the entire Civil War cast, but I can only knit so many hats.) It was clear that my friend Bailee and I really needed to take advantage of this. 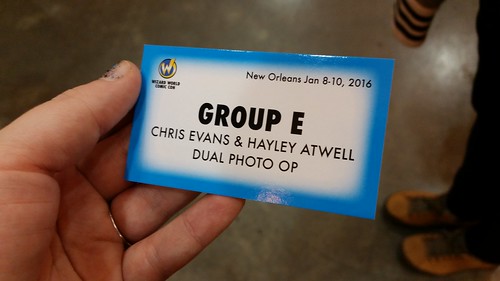 So now, we needed 4 hats, and I decided that a Winter Soldier/Bucky colorway would be a great idea, too, just so that I could sneak around in the open and wear my fandom a little more subtly. 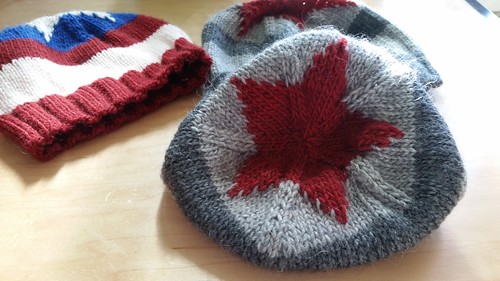 I’ve decided to call this original hat design “Oh Captain, My Captain,” because, oh man, I’d follow that guy to the end of the line. Want the pattern? Yeah, you do, especially in an easily printable PDF, right? Here you go!

Some notes about the pattern:

For the white section of the Captain America colorway, I had to use Brown Sheep Nature Spun Worsted since the LYS where I bought the rest of the yarn was unfortunately out of the white in Lamb’s Pride Worsted. Feel free to use whatever fantastic worsted-weight wool blend you’d like. 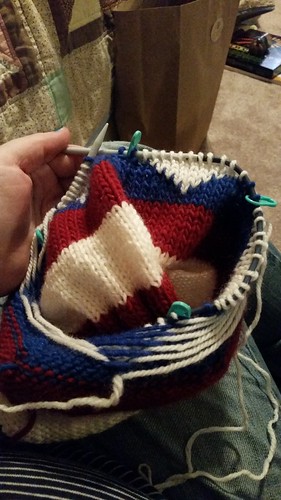 The “Star Crown” section combines fair-isle and decreasing at the same time, just to make things extra spicy. The easiest way to ensure that your fair-isle floats don’t get pulled too tight in all that decreasing? Flip your work inside and let the floats run around the outside of the hat. Just don’t pay much attention to the shape of the star in that picture, it’s from an earlier version where the star looked way too much like a flower. Lovely, but not what I was going for. 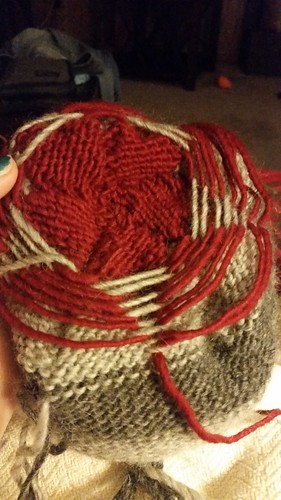 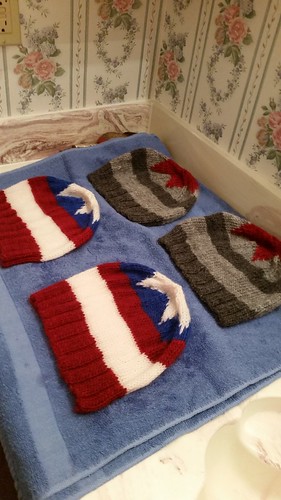 If you’re using Lamb’s Pride, or anything other super-saturated wool blend, make sure that you add vinegar to your blocking water to prevent color bleeding in those red/white stripey spots. Otherwise, you’ll be rocking a red, pink, and blue flag up there on your noggin. Lamb’s Pride gives you great suggestions on how to do this on their label, so do give it a look. 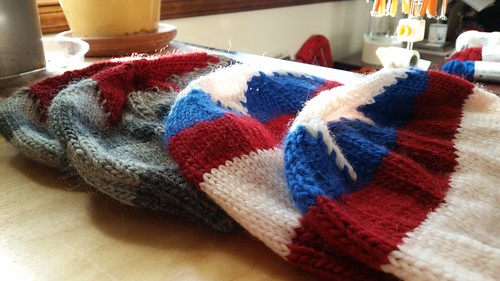 So. On the day of the con, we were so excited to get into the Captain America: Civil War panel that we lined up 3 hours early. It was worth it. 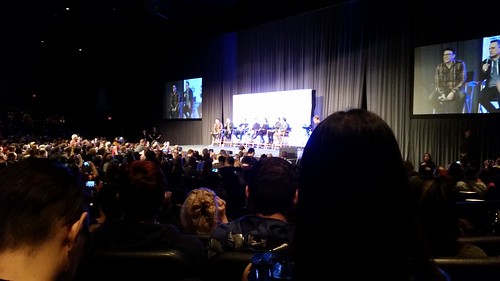 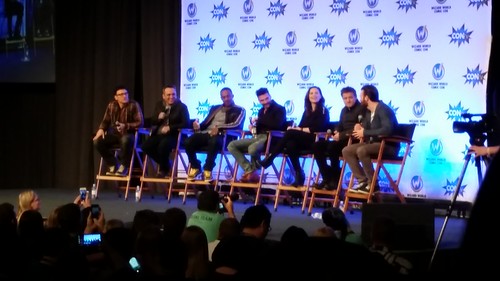 It was hard to even handle how much awesomeness was up there. The Russo brothers, Anthony Mackie, Frank Grillo, Hayley Atwell, Jeremy Renner, and My Captain. I mean, Chris Evans.

And honestly, I know I’m being very silly and fangirly about Mr. Evans, but I really do admire the man. He’s a huge supporter of Children’s Hospitals, and you all know how much that means to me as a pediatric RN. He has been really up-front about his problems with anxiety, and powers through media events like this one because of how much he enjoys his fans. He has helped a lot of people with their own anxiety issues (including myself) just by being honest and giving people permission to talk about it, which is pretty remarkable, considering that he’s in some of the most highly publicized movies ever made. What a gentleman. He really does deserve to be a superhero. 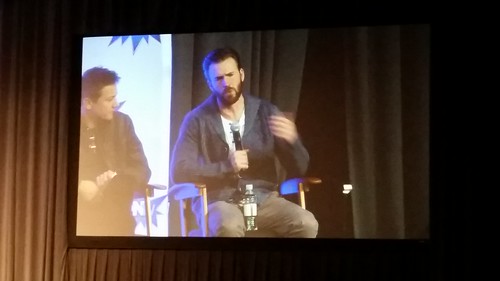 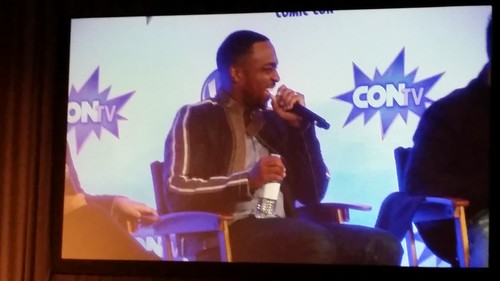 Anthony Mackie, a New Orleans native (who received a ridiculous amount of applause on this fact alone) was the most charming man in the world. 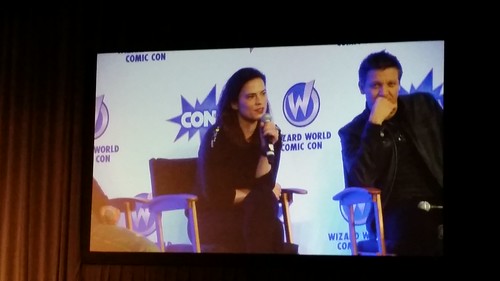 Hayley Atwell gave thoughtful and impassioned responses to questions, and we all fell in love with her all over again. And Jeremy Renner was a grumpy old man, in the best possible way. 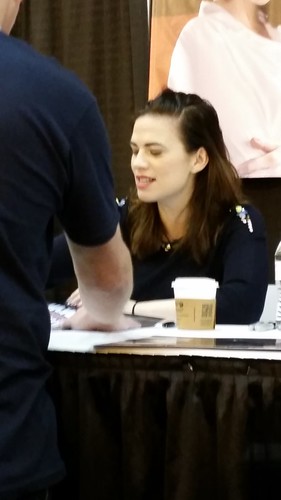 Bailee got an autograph with Hayley, and I wasn’t supposed to be taking pictures, but it was hard to resist. 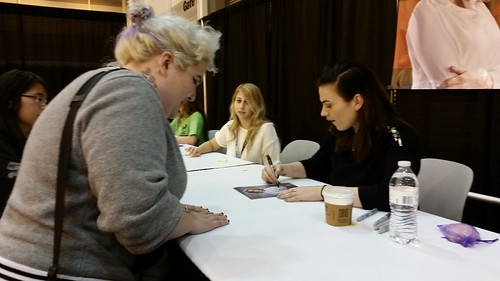 She was just so lovely! She and Bailee had an awesome chat about sharks while her assistant made angry eyes at me as I continued to ignore her. 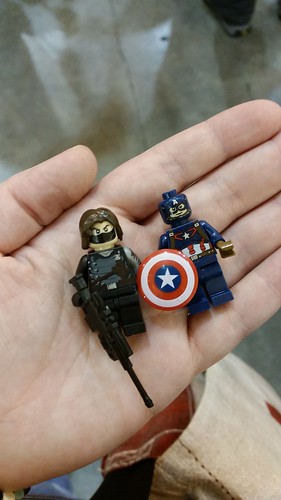 We got so much fun merch stuff, and now I have a Captain America pin, shirt, and poster to go along with my nerdy hat. I bought some Steve and Bucky Lego figures, too, while we were getting ourselves ready to meet Chris Evans. So freaking cute, even with that tiny machine gun.

Then, the moment of truth. We waited in line for about 30 minutes for our photo op, and once it started moving, I started panicking. The line was moving waaaaay too fast. It became clear that we would only be getting about 10 seconds in our picture, not nearly enough time to hand these wonderful people some hats and tell them how much they both mean to me. 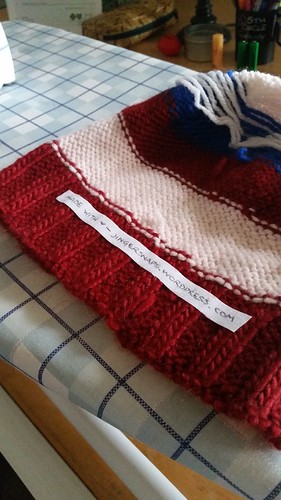 Luckily, I had the presence of mind to put the blog address inside all of the hats, so I basically could just throw them to them, which is sort of what ended up happening.

It was our turn, Bailee and I were both adorably wearing our Bucky versions of the hat, and I walked up and said, “I made you guys some hats!”

Hayley Atwell said, “Oh, I’m definitely going to wear this,” and tried to figure out how to get it on properly, but then the photographer was yelling at us to turn and smile. 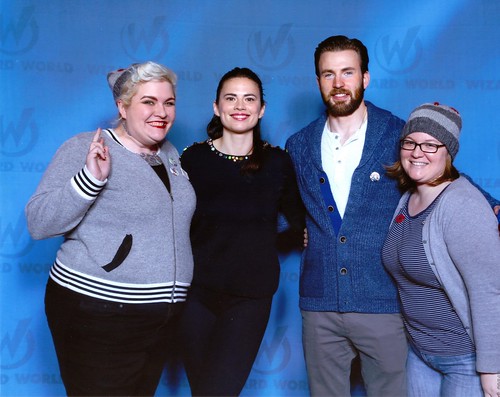 And then it was over. If you look way over in the far right-hand edge of the picture, you can see that Chris Evans is holding the hat, but unfortunately, not wearing it for the picture. Oh, and that hand holding the hat was definitely around my shoulders, and I don’t know if I’ve fully recovered from that quite yet.

We were smiling from ear to ear for at least an hour afterwards, rehashing the same 10 seconds over and over. Or maybe that was just me. If anything, I hope that the both of them take a little bit of time to click over here and see how much they are appreciated. To realize that someone enjoys their work so much that they are willing to speed-knit fair-isle with five-point decreasing just to show their love. 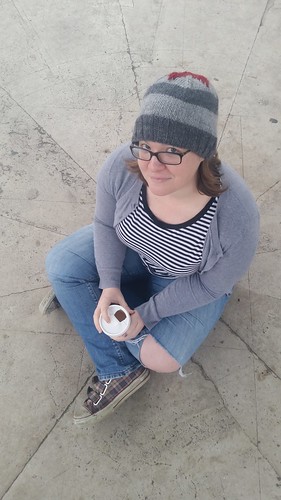 Handknit love is the best kind of love, and I’ll never stop handing it out to those I appreciate and admire. Never.