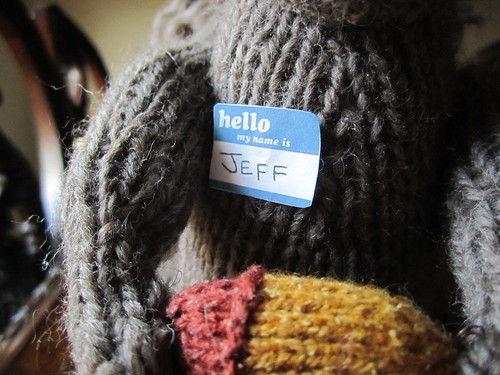 I love Eddie Izzard. I’m not sure when I saw or heard him perform for the first time, but it was love at first sight/listen. He is the funniest man alive. Everytime I hear someone say that they did something absolutely insane (or when I catch people sleeping in the big squishy chairs at the bookstore), I hear his “like you do” in my head in that wonderful lilt. I also hear his voice whenever I say the word “jam.” I offer “cake or death” at every opportunity. I like my coffee covered in beeeeees. I have declared that the mouse is under the table, the cat is on the chair, and the monkey is on the branch.

Those who aren’t in the know don’t realize that this stuff is hilarious. Story of my life.

Dan gets it, though. He even got me a birthday cake covered in beeeeees. 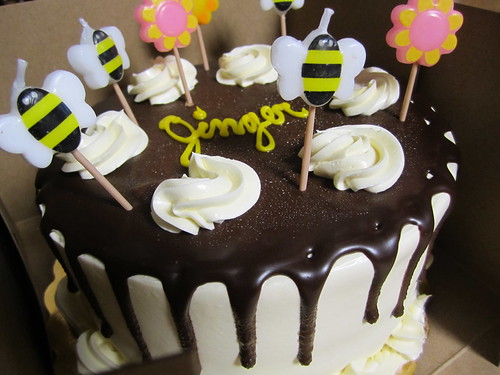 My brother also knows about my deep-seated love, and he surprised us with tickets to go and see him in Austin this weekend as my birthday present this year. I may have danced a little when he told me. More than a little. I then concocted a plan that seems extremely similar to a plan that I had last year around the same time: I would knit Eddie Izzard a squirrel and present it to him in some way at his show, just for him to have for no reason. Like you do. 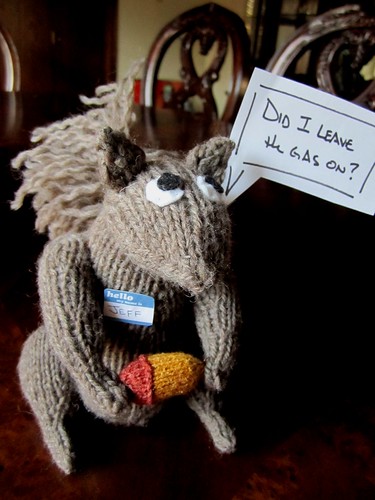 This little guy is named Jeff (obviously) after Jeff, the god of biscuits, Jeff Vader, Jeff Jeffty Jeff, and all of the other strange Jeffs that find their way into Mr. Izzard’s wonderful stories. (Oh my god, I just saw that they sell an “I’m Jeff Vader” t-shirt on his website. Waaaaaant.) 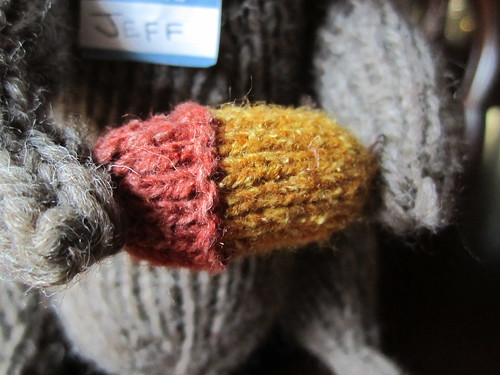 He has been interrupted during his frantic acorn eating with distressing thoughts as to whether or not he left the gas on. 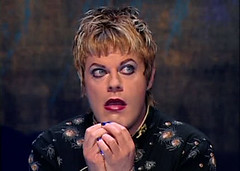 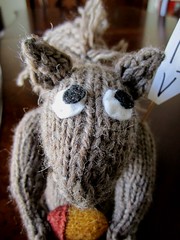 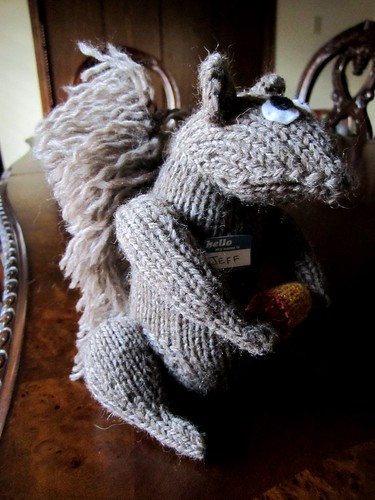 The pattern for Jeff the Squirrel came from the adorably titled Knit One Squirrel Two by Rabbit Hole Knits, purveyor of all sorts of knitted cuteness. His acorn came from the Spiffy Little Acorn pattern by Revati Poole, also so tiny and adorable. (Ravelry links all, by the by.) 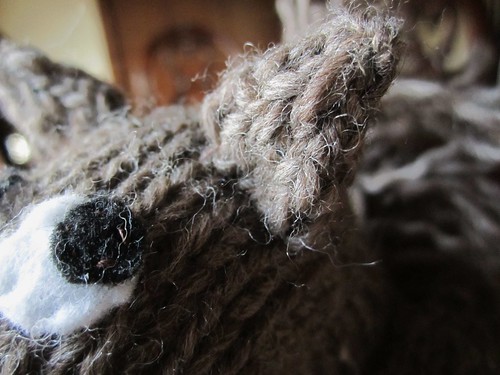 I think that knitting and sewing on those teeny tiny little ears was my absolute favorite part. 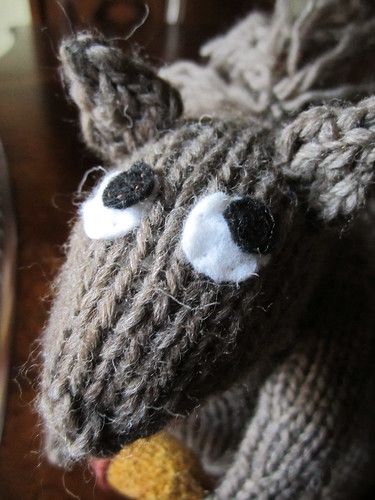 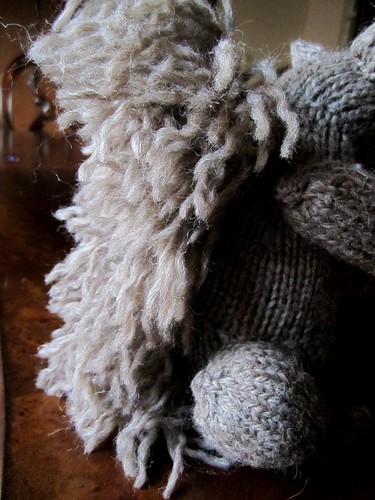 And that huge fluffy tail was a great deal of fun as well, even with the ridiculous amount of tiny knots and unwinding of yarn strands involved. The tutorial for this is located here. I had some trouble finding it at first on the main site, so I figured that anyone else who wanted to join in the fun shouldn’t have to waste time searching for it, too. All you need for it is a pipe cleaner and a good movie to watch while you make knots. 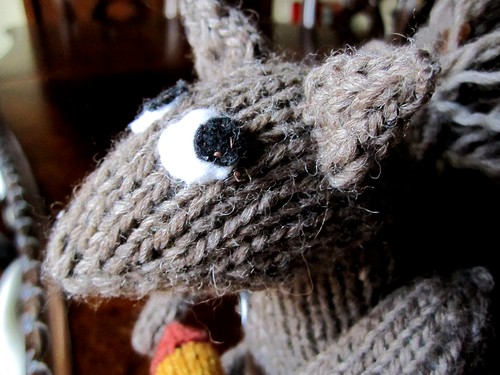 Whenever I see this picture, all I can hear is, “That squirrel is looking at me,” in my best Brian Fellows voice.

This little guy was just a joy to work on, and I was more than a little sad to finish him up. However, I know that he’ll bring joy (or at the very least, delighted confusion) to an all-around fantastic person, which more than makes up for it. 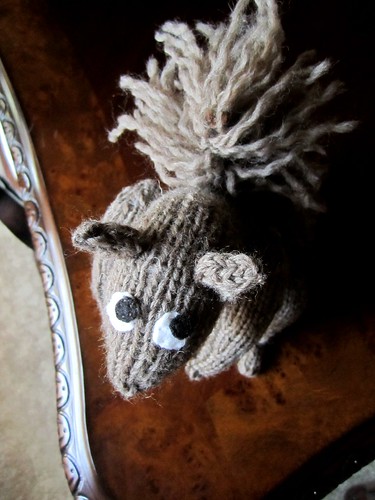 The only trouble is…how do you manage to give a squirrel to Eddie Izzard? With my David-Sedaris-owl-giving, there was a book signing involved, which made the whole hand-off of the adorable knitted item a lot easier. This is a whole different type of event, a stand-up show in a big theatre…I have no idea how to present him with his squirrel. Ideas have been tossed around like waiting out at the backstage door after the show, speaking to security guards and having them pass it along, passing it hand-over-hand (crowdsurfing the squirrel!) until it reaches the stage…All equally weird and seemingly likely to fail. I’m thinking that I might just send him a tweet linking to this post? I have no idea. I would like to just come off with as little of a hint of stalkerishness as possible.

All I want is for an awesome person to have a handmade gift. And how could you say no to this face? 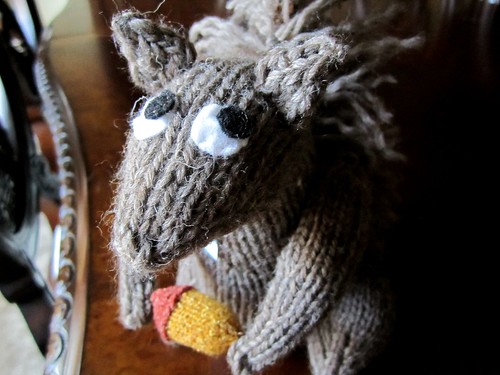 5 thoughts on “Mr. Izzard, I Made You a Squirrel (or…Jeff the Squirrel)”