The final moment is upon us. The grand finale of the self-imposed Summer of Baby Blankets is finally here! (Want to read vol. 1 and vol. 2?) I know that all two of you have been waiting with such anticipation, so here we go. 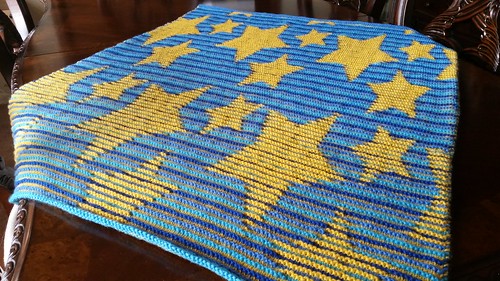 Now, there are those among you who don’t know about this amazing thing called illusion knitting (or shadow knitting, if you’re super cool). Here is what this blanket looks like when you look at it head-on. 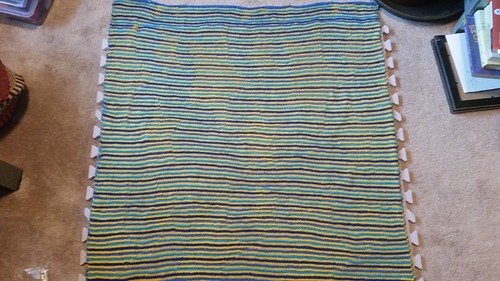 Seemingly random stripey-ness. Cheerful, and somehow very Spongebob-esque, but nothing much going on, except if you look at it too long, you might get a mild headache. 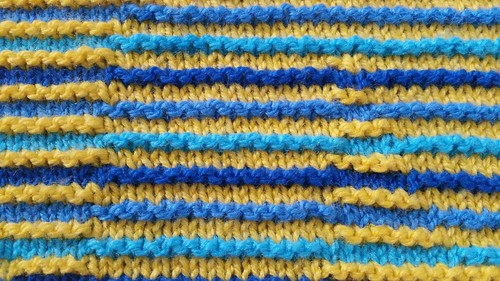 However, embedded within those innocent garter-stitch-resembling stripes are a series of knits and purls that transform the picture when you look at it slightly off-kilter. 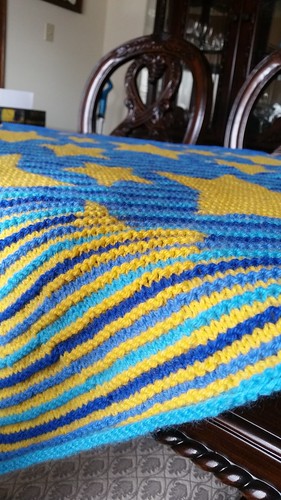 When I found out that my friend and co-worker Samantha was pregnant, I knew that I had to make something fun for her. She’s a bright and bubbly person, and she once bought me a book of knitting patterns for tiny monster hats for children, so we definitely have the same inclination towards silliness and whimsy. When I was scrolling through baby blanket patterns on Ravelry and saw this bit of wonderfulness pop up, I knew she’d be into it.

Now, I’ve seen the illusion knitting technique countless times on scarves, usually cleverly hiding secret patterns or pictures or words in there (shout out to my Twitter friend Jen who made an amazing rainbow illusion scarf to go with her TAZ Istus cosplay), but I’ve never seen it in a blanket. It’s just freaking genius on a blanket, because you are almost always looking at the surface at a angle, and almost always with a large part of the right side exposed, something that’s just not always the case with scarves. 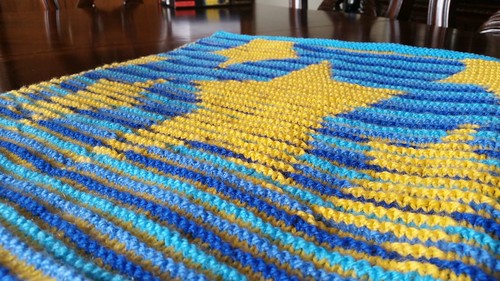 Getting sick of the stars yet? Me neither.

The pattern is Star Illusion Blanket by fidget, or Katie Ahlquist, and it’s just a brilliant piece of design. In the original pattern, you knit three separate panels of stars with varying “blocks” of foreground and background colors and then seam them together, to get this sort of faded stained glass effect in the finished piece.

Now, I basically cannot follow a pattern as written lately, so my version is a little bit different. First, I thought about having to sew those strips together and matching up all of those stripes perfectly, and I had flashbacks of grafting together my Autumn Vindauga blanket, and decided that one experience like that was enough for one summer. So, instead, I cast on for the entire blanket all together (which is 158 sts, if you’re playing along at home). 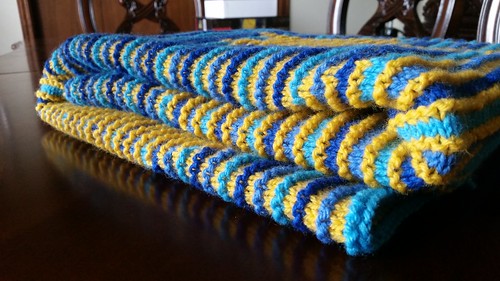 For the yarn, I used Plymouth Encore Worsted, because I wanted something super strong and durable with the brightest colors I could find. Instead of alternating in blocks of color for both the foreground and background, I decided to just have one foreground color (Bright Yellow [1382]), and then striped three background colors throughout, carrying the colors up the sides. (Background colors are, in order, Miami Aqua [0235], Serenity Blue [4045], and Royal [0133].). I think it makes for this nice watercolor-y rippled effect, don’t you? 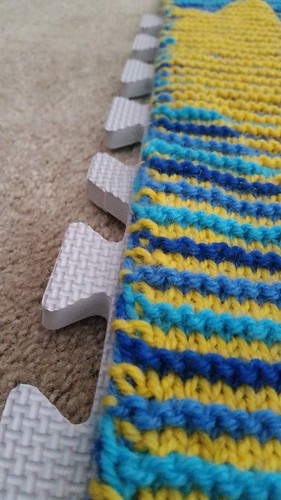 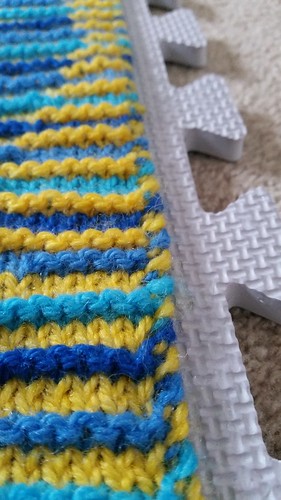 I was a little bit worried about the edges looking messy since I carried up the colors and Encore isn’t exactly a “blocking” type of yarn, but I’m thinking it’s pretty darn good. The original pattern has you back the entire thing, plus cover the edges, with fabric, which looks amazing if you know what you’re doing. I am not the world’s greatest seamstress, so the fabric portion just went out the window. 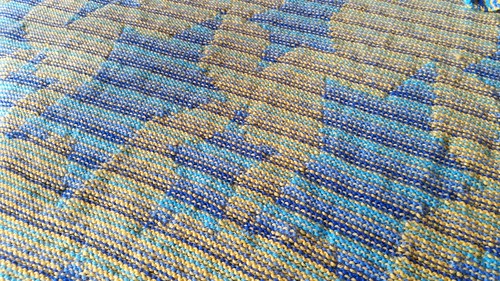 Besides, who would want to miss out on how freaking cool the wrong side of this thing is? 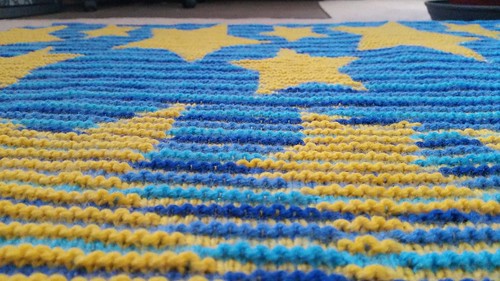 I only did two repeats of the pattern, but extended it to row 2 of the next repeat, just to make sure that I ended on a background row on both sides. My need for the slightest bit of symmetry gets in the way sometimes. I would’ve kept going until the next aqua stripe, but I don’t think that I had enough yarn, plus it was nice to have the top and bottom just mirror each other. After it was done, it got a bath with some Soak (mainly just to get the dye smell out), then a little bit of pinning and a gentle steam block, just to make the edges and corners lie down a little bit better.

You’ve got to be super careful messing around with a hot steam iron and acrylic blends, otherwise you’ll “kill” the acrylic, leaving you with a weird limp mess. Sometimes, this is the goal, but usually you don’t want to take the spring out of your yarn. In order to lightly steam-block this, I just held the iron about an inch over the fabric and shot steam down, constantly moving and never touching the surface. I let it dry and cool down, then passed over it again, then unpinned and called it a day. 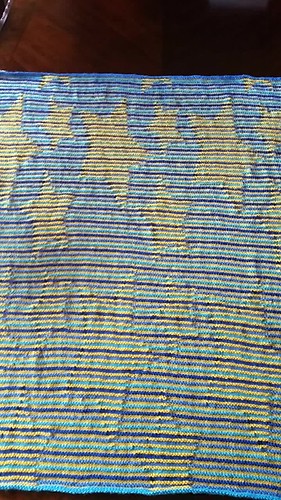 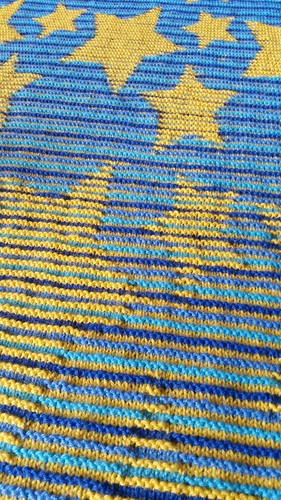 So, thanks to everyone for joining me on this Summer of Baby Blankets journey. We striped and grafted and cabled our way through the summer, and we are better knitters for it. Go and find yourself a technique you want to try and make a baby blanket out of it. You’ll be glad you did.

Hail Nyx!
Don't look at me.
Finishing the night with heart-shaped strawberry shortcakes.