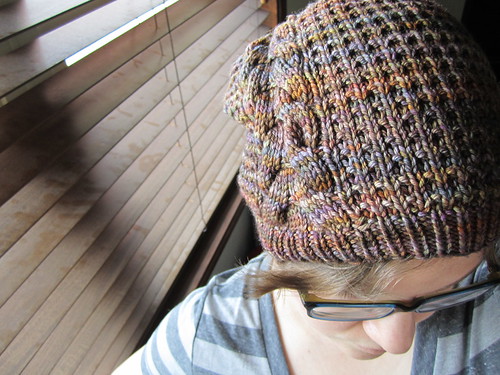 About a month ago, I saw a beautiful skein of Malabrigo Rios sitting in a basket in a yarn shop in New Orleans. (The Quarter Stitch in the French Quarter. And yes, before you ask, of course you should go. It is small and colorful and packed with amazing things and friendly, helpful people.) 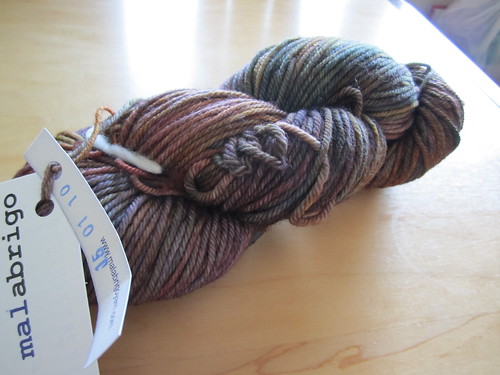 It was relatively unassuming. Just pale and brownish, a bit of a pastel rainbow going on. The color name listed is Piedras, spanish for “stones.” It reminds me of smooth river stones or collections of seashells. Items that seem drab and brown from far away but reveal rainbows of color on closer inspection.

Dan was skeptical, but I saw that it was going to knit up into something special. Something that would show off that hand-dyed splendor for which Malabrigo is known and coveted. However, it’s also some pricey stuff, so only one skein went home with me. 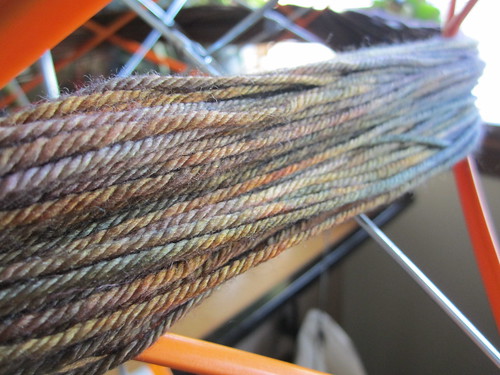 While it was sitting on the swift, being wound, I noticed those beautiful rainbows even more. 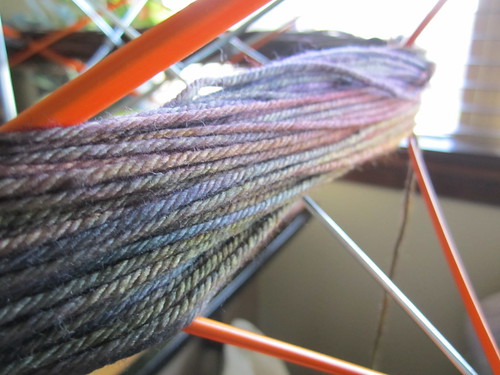 I mean, look at that! It’s not screaming out to be noticed, but it’s so pretty that I can’t even stand it. What do you do with only one skein of a yarn like that? 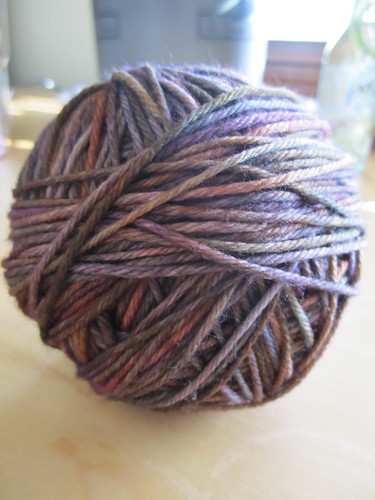 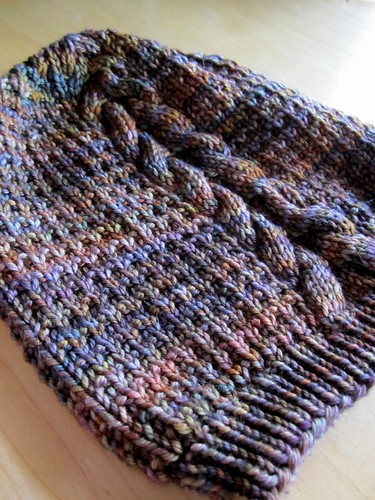 If you guessed make a fabulous slouchy hat with lots o’ texture, you are right! Meet Stone Molly.

The pattern is Molly from the very talented Erin Ruth at knit me a song. I can’t pretend that the name didn’t draw me in, as this particular combination of colors plus pattern name makes me think of Molly Hooper from Sherlock. (Let’s all pretend that my post title didn’t give that away.) It doesn’t appear as though her blog is still up and running, which is a shame, because this hat is an engineering marvel. 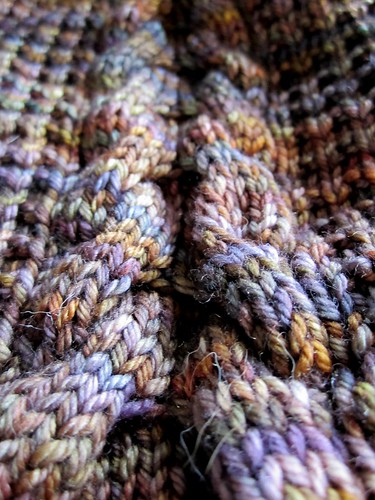 First off, you are working in two different stitch patterns that have two completely different row counts. The mistake ribbing (or waffle stitch, if you want to make yourself hungry while talking about your knitting) has a 3-row repeat. The cable has an 8-row repeat. Completely non-divisible and yet totally balanced. Genius. 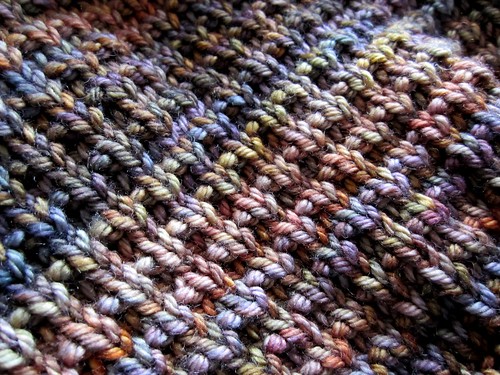 Secondly, the decreases in this hat are deliberately placed in order to interrupt the stitch patterns as little as possible. They only take place on knit rows so that the purl stitches in the ribbing track all the way up the crown. There are no attention-grabbing spirals or squares, just fields of purls and cable that inexplicably get smaller and dwindle towards the top. It would have never even occurred to me to do such things. 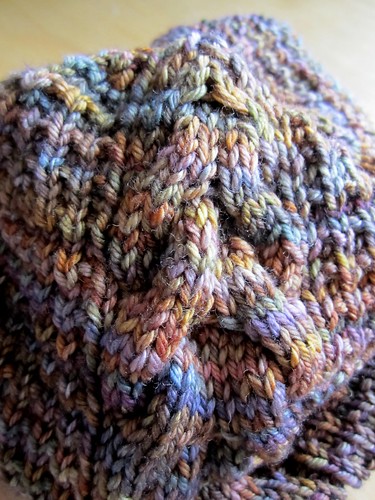 Thirdly (and in my opinion, bestly), the cable pattern does not just unceremoniously cut off once the decreasing begins, which is something that happens often in lesser hat patterns. This cable subtly tapers down until it melts into the background, and when the hat is on, the effect is of a wide cable that evenly decreases all the way up to the top of the head. And also, just one cable element to be worn rakishly off to the side? Yes, please!

In order to make this hat with only one skein of Malabrigo Rios (which clocks in at a generous 210 yds., normally fantastic for a hat, but maybe not for one with so much texture and slouch), some modifications did have to be made, but I was sure to incorporate these as seamlessly as possible into the original pattern. I fought the good fight in trying to make the whole thing with just one skein, but I ran out of yarn with only 5 decrease rounds to go, and all that beauty was certainly not going to be sullied with the clumsy addition of another yarn for the top. I did some math, ripped things back out to the appropriate point, and soldiered on.

Now, in order to knit this as I did, you have to go and download the original pattern because it is so much genius, and you definitely want to support those designers that make these beautiful, elegant things, yes? Then take a look at my changes as follows:

The original pattern states, “Repeat Rnds (1-3) 18 times more.” Instead, I only did 15 repeats of the entire sequence, ending up with Row 2 instead of Row 3 of the cable pattern. This way, the ribbing section remains intact and only the cable crosses need to be moved around within the crown decrease section. I know this doesn’t make much sense without the pattern in front of you, but that’s why you went and downloaded it, right? Right.

Now for those decreases. Only some of the rows deviate, and this is only to offset the cable crosses so that they remain the correct proportions for the cable to decrease seamlessly into the crown. Here are the way that those rows should now read: 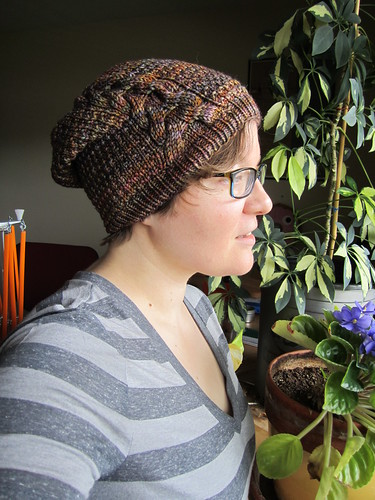 The combination of all that texture and the subtle rainbow striping of the yarn results in a hat that looks like a rich coppery brown from afar, but reveals hidden rainbows of color close-up. Not to toot my own horn too much (but really, what else is blogging but that?) I feel like this was the perfect marriage of yarn and pattern, and I can’t wait for the fall so that I can wear it everywhere.