My friend Gaby recently made the mistake of making me interested in something.

She told me about a lovely farmers’ market and farm located right in the middle of New Orleans called Hollygrove Market & Farm, and they have a weekly “box” (spoilers: it’s actually a bag.) of amazing farm-fresh vegetables, fruits, and other glorious food items that come from all kinds of wonderful backyard and independent farms in Louisiana and southern Mississippi, and it’s only $25. How awesome is that? It is remarkable that after living 6 years in Colorado, I somehow never got in on a CSA-subscription, but know that I have been enlightened as to Hollygrove’s existence, things are a-changin’.

Part of what’s great about Hollygrove is that they put up on their website what’s going to be in the “box” each week, so that you can choose if you want to get in on that or not. Right now I am kicking myself for not going this week because homemade organic blueberry jam was involved. And sweet potatoes! Sigh. 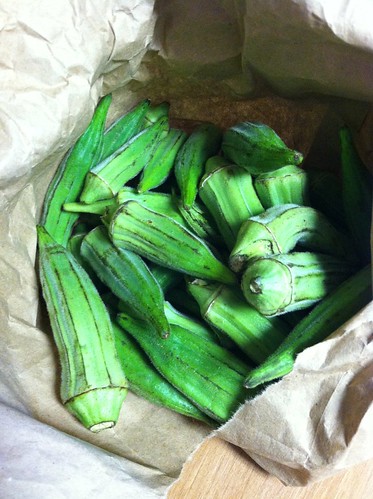 Since I started making Hollygrove a part of my grocery considerations, I have received some treasures (like this amazing okra that has no business being so beautifully green) that needed some extra prep work, with awesome results. Working from a CSA-style box makes you change the way you think about cooking. It makes you want to eat seasonally all the time. It makes you want to go put your own hands in the dirt for a while. And it makes you wonder how hard it would be to make things that most normal people usually buy. 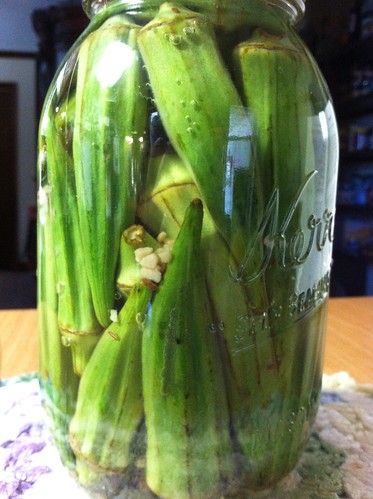 The Hip Girl’s Guide to Homemaking really helped me out on this one with this super easy recipe for refrigerator pickled okra. For those not in the know (and you’re looking at food blogs on the Internet, so how could this be?) refrigerator pickling is a quick-pickling method that doesn’t involve lengthy boiling periods for brine-making, sealing, and sterilization, since the contents are usually much, much smaller and meant to be consumed within a month or slightly longer. These types of things are especially appealing if you only have enough okra to fill one quart jar (about a pound) and the grocery stores in your area would look at you sideways if you asked them where they kept the wide-mouth funnels.

Directions were followed, with the one exception that I put a few peppercorns into the mix instead of hot peppers, because I have come to terms with just not being badass enough for that. And then the waiting ensued. You have to wait to eat these for at least two weeks, otherwise your okra will somehow be both fibrous and slimy, a disgusting combination. But, if you diligently wait the two weeks? 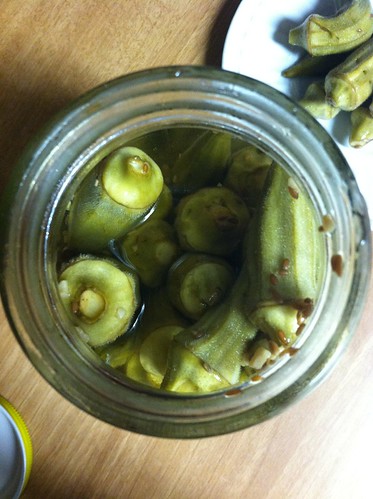 You will be rewarded. 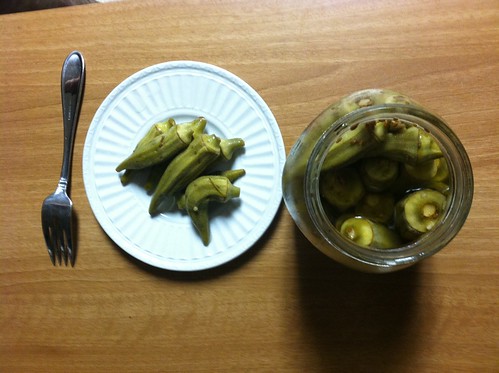 And then you will eat a whole bunch and brag to everyone on Facebook and Instagram that you did something that countless millions of other people have done before you, but oh my god it doesn’t matter because pickling is a miracle. 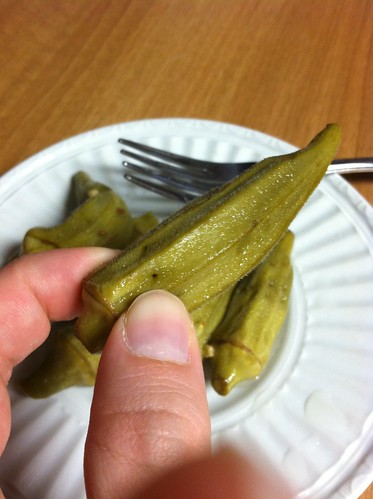 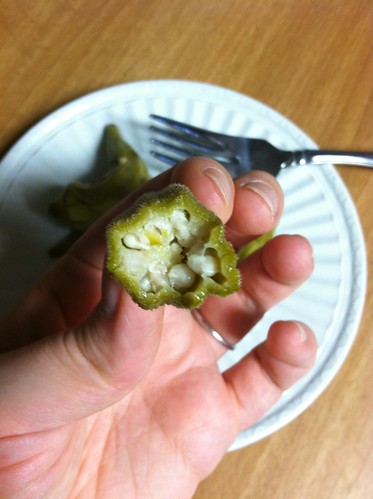 These are sour and crunchy and amazing, with little seeds that pop in your mouth. You will probably never ever buy a jar of pickled okra again. 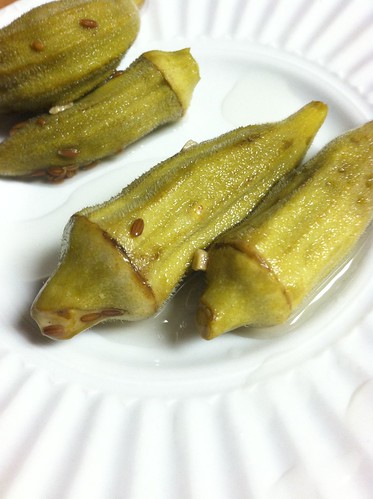 In fact, you’ll now be looking for more opportunities to spend an inordinately long period of time hand-crafting something that any other person would have used a 2-for-1 coupon for. 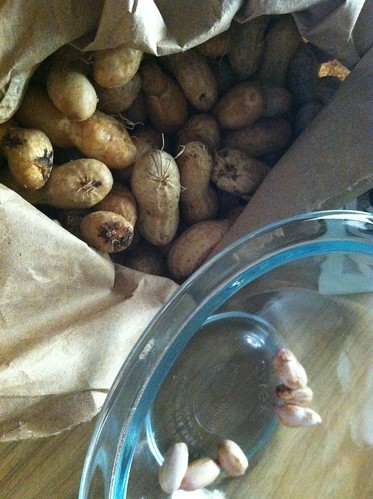 The next time I got the “box,” Hollygrove had included a pound of green peanuts. What on earth are green peanuts, you ask? Oh wait, you already knew? Well, I had no idea and needed some assistance. Avalon Acres helped me out. Green peanuts are basically totally raw, straight from the ground, chock full of water and ready for boiling or roasting. 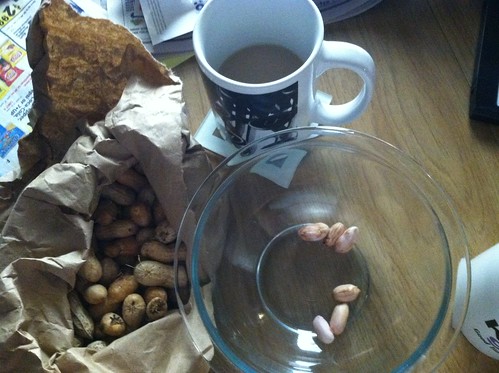 Something that they don’t tell you is that peeling green peanuts is not a walk in the park. Peeling this one pound of peanuts took me at least half of a game of Scrabble. Good thing I had coffee to aid me. 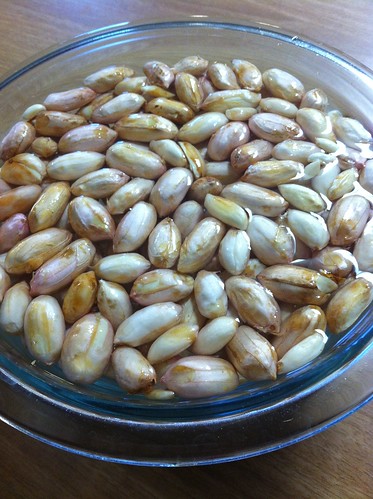 The peeled peanuts were soaked (floated, really) in some salt water… 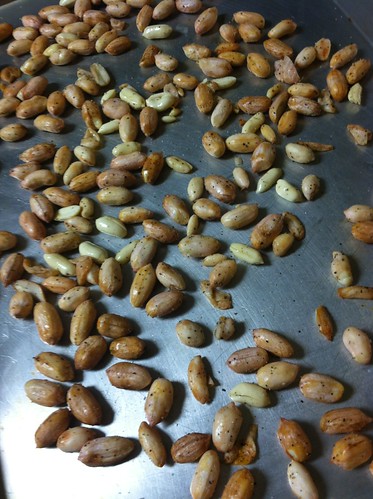 …dried off and coated in salt and pepper… 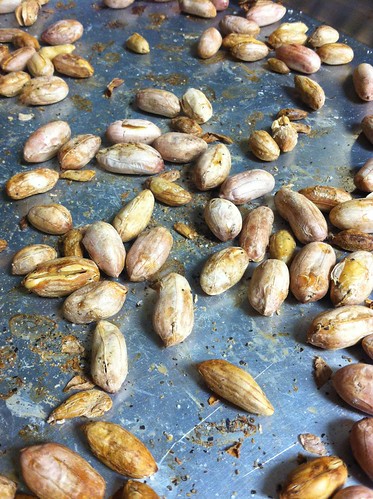 …and then roasted for waaaaaay longer than the recipe told me to. I’m thinking that I probably need to get my oven checked out now, since I had a very similar problem roasting pumpkin seeds last year. The recipe claims that 20 minutes at 350 degrees should be enough, but we went more than double that time before anything looked vaguely roasted. 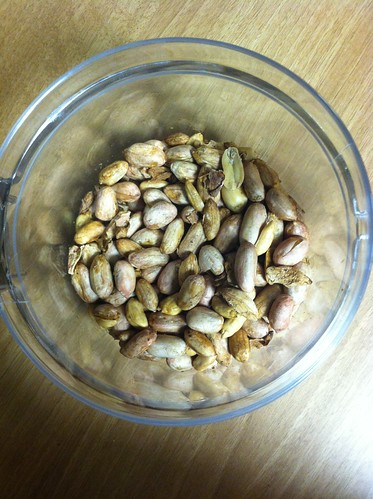 Good news, though. They were delicious. 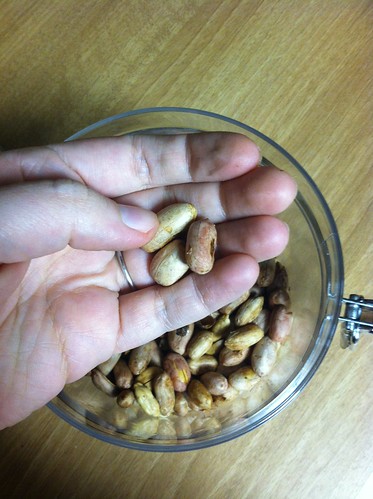 Normally, the little papery inner shells of peanuts give me the heebie-jeebies, and I always am careful to peel them aside if eating roasted peanuts. On these? They were the best part! Every bit was super crunchy and smokey, and they only lasted about 48 hours.

My desire for making common household condiments and appetizer-type things has only intensified. I think I need to rush into this headlong and make my own ketchup now. Who’s with me?