I haven’t been posting much, but I have been knitting like a crazy person as of late. Ever since my summer semester ended, I threw myself into a self-imposed “Summer of Socks,” the details of which I am not at liberty to disclose due to the fact that it is super-secret.

I can give you a few little cheeky detail shots, though, if that tickles your fancy. 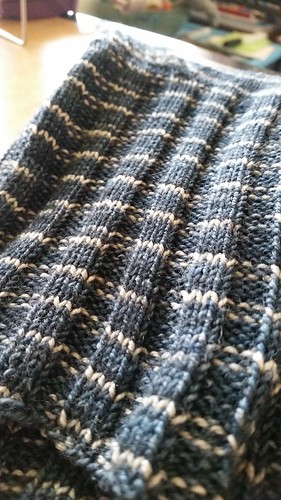 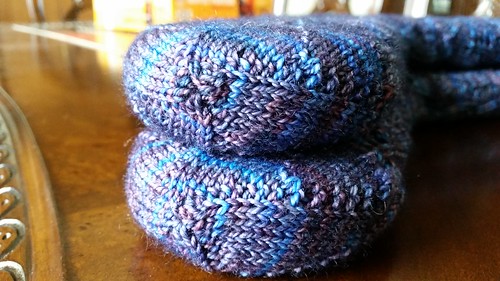 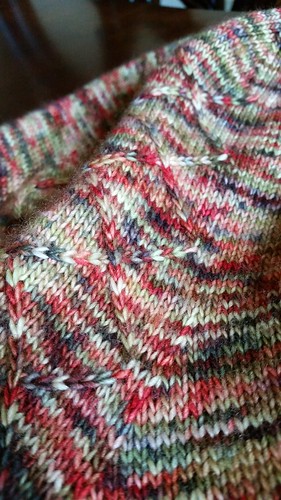 Before the “Summer of Socks” began, I worked on a project near and dear to my heart, a baby blanket for my friend and co-worker Mary, who is about to have her first baby. 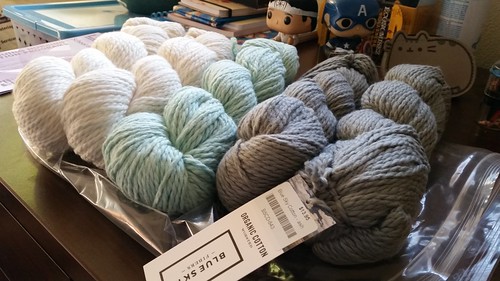 I’m a firm believer in the fact that baby blankets need to be easy to care for, yet also classic and clean-looking, so what better yarn than Blue Sky Cotton? It’s super soft and lofty, yet strong and washable. It has wonderful stitch definition despite its softness, perfect for the pattern that we chose. 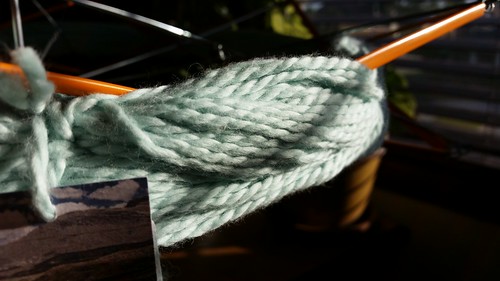 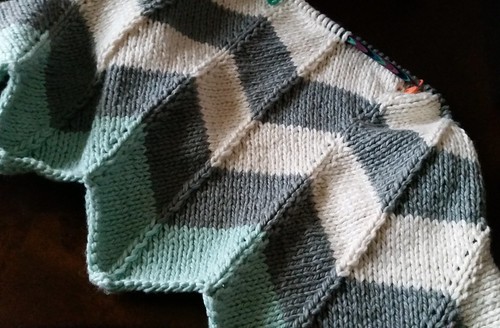 Mary told me that she already had some antique and vintage furniture for the baby’s nursery, so I wanted her to be able to have something that could fit in along with the antiques and yet still be sort of on-trend. When I told her about the Chevron Baby Blanket by Espace Tricot, she was totally on-board. And it already recommended Blue Sky Cotton for the yarn! What kismet.

Mary picked the colors Ash, Bone, and Aloe, and I got to work, right after I was done being stunned at how beautiful they all looked together. 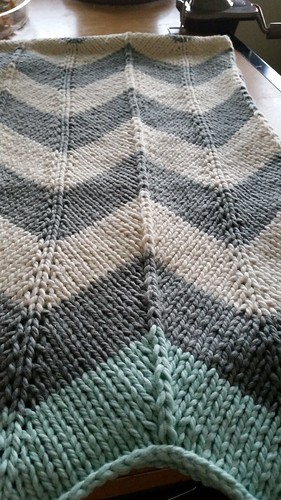 The only change I made to the original pattern was leaving the inside portion of the blanket striped with only two colors, and leaving just one stripe of accent color on the end. 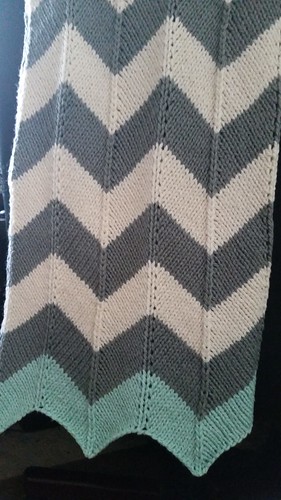 If you’d like to do this yourself, you need to buy 1 skein of your accent color, and 2 skeins each of your inner stripes. I also carried the colors up the sides, twisting the alternate colors at each right side row rather than breaking the yarn, because I thought that all those woven-in ends would break up the clean look of the whole thing.

After I was done, I still had quite a bit of the Aloe color left over, plus a need to keep making things for the new baby. So, I went looking for a vintage-y stuffed animal pattern. 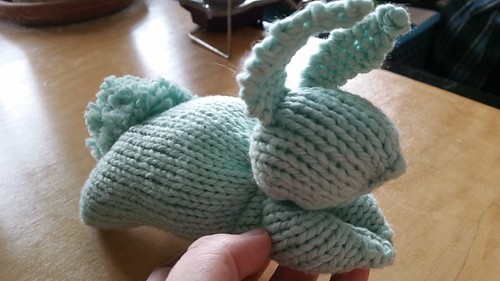 The overall winner was the Knitted Bunny pattern by Jackie Erickson-Schweitzer, a fun little origami-inspired piece of fiddliness that was right up my alley. 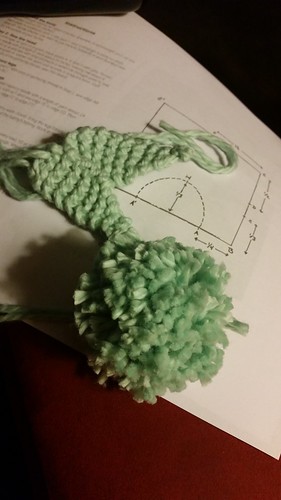 First, you knit a plain stockinette square. Then, alchemy-like, you use a little polyfil stuffing and some strategically placed rows of stitches to fold it up into an adorable bunny. You also take the time to knit some tiny ears, which might be the cutest part of the whole thing.

I did make a tiny change, though, to enhance cuteness. In the original pattern, they tell you just to use a crochet hook to pull out some stuffing for a tail. Although this might be cute, it probably also isn’t ideal for an animal for child, so I went ahead and made a big fluffy pom-pom tail that is easily removable/remade if it gets pulled apart by a curious baby. 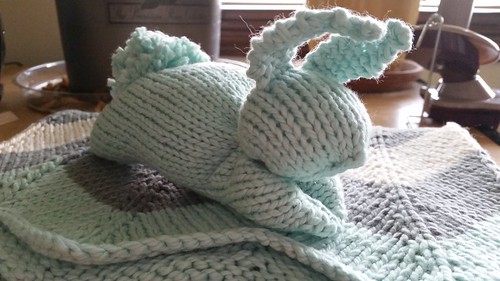 It’s so freaking cute I can barely stand it. I was watching a documentary about the trial of Whitey Bulger while I was making it, which tempers that a bit, I guess. 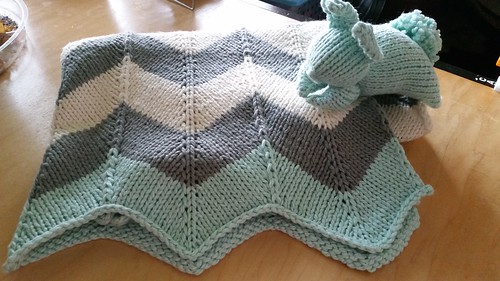 Simple and classic. And chevron-y and pastel-y enough to be somehow completely in style. I am beyond proud of how it all came out. 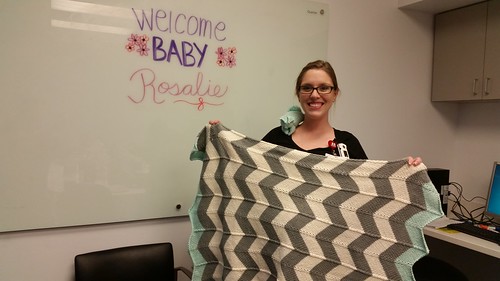 And I think she liked it. Seriously, it could not go to a more deserving person. We both started nursing at our hospital at the same time, went through orientation together, and I can honestly say that she is one of my favorite people. Mary is a little bit of sunshine in my day, and I was happy to give her something lovely that she will hopefully be able to love for a long time. 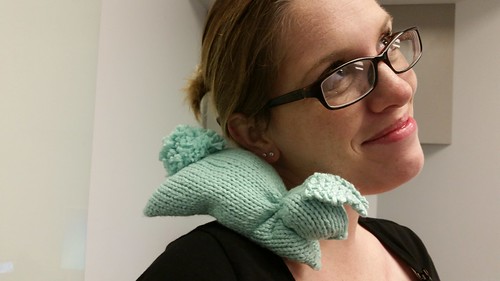 She’s good people. Now with a good bunny. And a good blanket. It’s the least I could do.

I promised some bunny action last time, didn’t I?

My brother’s girlfriend, now fiancée, Kim, had expressed a desire in getting a stuffed bunny ever since she saw the infamous David Sedaris owl. I figured that Christmas-time was probably the perfect time to make that happen, but when I was searching for patterns, I had a hard time finding something small and squishable, yet full of potential personality. Nothing had that perfect proportion like the original owl pattern did of fatness and plumpness, while still having enough room for an expressive face, although some things came really close.

Enter Big Cuddly Bunny by one of the all-time greatest knitting sites ever, the Purl Bee. Purl Soho’s blend of whimsy, retro style, and good old-fashioned solid crafting is always right on point. Their giant crazy bunny was going to work just fine, but he just needed to be miniaturized.

Here are my pattern changes, so that you can make your own tinier, yet still super cuddly, version for yourself. BIG GIANT NOTE HERE: I am not claiming the genius of the Purl Bee to be my own. I am only posting my pattern modifications for this particular project. Please go visit them to get the original pattern if you wish to partake in the bunniness.

Trip wishes that he could, but being without thumbs makes the knitting kind of difficult. He’ll just settle for biting everything instead.

First off, our materials are obviously slightly different. I used Cascade Yarns Ecological Wool, color 8085, the leftovers from my totally awesome, yet seldom used (because I just know that the cats will eat it somehow), Hemlock Ring Blanket. Way less than one skein’s worth, obviously. I used double-pointed US 7 needles as well. And you’ll need some black and white felt for Baxter’s quizzical expression, along with white and black sewing thread.  The gauge is somewhere along the lines of 4.5-5 sts per inch, but the main goal is just to get a sturdy fabric that won’t stretch out of control when stuffed.

Now for the real changes.

Follow the rest of the finishing steps detailed here, except you obviously won’t need a whole bag of stuffing. Just stuff your bunny up plump as you can. You’ll be able to add in the last bits of fluff before you close him up, so don’t worry if you can’t get it all in there right now.

No changes to “THE BUNNY’S LEFT EAR.” Just do that all as written.

The only change for “THE BUNNY’S RIGHT EAR” takes place when you are reorienting your stitches to get to the second ear. Since we ended up with more stitches at the top than the original pattern, you’re going to have 10 stitches between the ears on either side of the top of the bunny’s head, meaning that a total of 20 sts are not being used to make the ears. Just knit the ear as stated, making sure that you have left the proper amount of stitches in the middle to close up the bunny’s head, and only using 10 sts to make the ear.

Make perfect sense? It will when you have it in front of you. I promise.

After making your second ear, go ahead and top off your bunny with the last amounts of stuffing and kitchener him closed. I did not do any duplicate stitching for the ears, because I didn’t feel as though Baxter was in a particularly cutesy mood. He’s more of a sedate, cool, woodsy bunny, even though he does look a little anxious.

After that, cut out all your felt pieces and sew them on with gusto, just like you did with your owl and carrot. Didn’t make those? Just take tiny stitches, and be sure to hide all of your knots on the inside of your work. I find that stitching the pupils onto the eyes first makes things a lot easier. Make sure his teeth are slightly crooked, and you’re all good to go!

Wait! Don’t forget to make the pom-pom tail! I bought my very first pom-pom maker for this, and I have to say, it was an extremely enjoyable experience. Something about that fat, plump pom-pom is very satisfying, especially since I have only been able to turn out limp, floppy ones in the past. The thing I am getting at here is — go and buy a pom-pom maker right now. Even if you don’t use it much, it will make your life better.

And you will make someone else’s life better when they receive their new squishy friend.  Now, go make a bunny and make somebody happy.