In my last post, I made mention of a pie. A pie that would be the first post of the year. A pie that sounded so tantalizing in my mind that I just had to make it, and force my family to eat it on Christmas, no less. 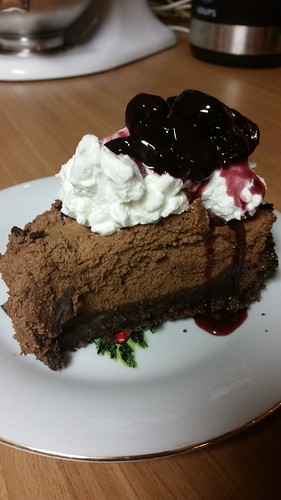 A pie that delivers three different hits of chocolate right to your face, plus layers on fluffy whipped cream and a decadent cherry topping. Yes, ladies and gents, it’s Black Forest Pie.

Let’s pretend that that’s not something I just made up, okay? I have no idea how the actual Black Forest in Germany and the type of ham and chocolate and cherries all got mixed up together, but damn if it doesn’t make for an amazing pie experience.

This one takes a good long time, too, with multiple cooking and baking and cooling and chilling steps, so please make sure you read all the way through before you start. Don’t end up with a runny, melted pie and sad guests.

Black Forest Pie
this pie is not a lie

Brownie Bottom:
(BIG IMPORTANT NOTE! This makes enough brownie batter for two pies! Make as directed, divide in two, and freeze the remaining portion to make another pie later. Or divide the following in half if you want to make just one, if you can split an egg in half.)
1/2 cup (1 stick) butter, cut into pieces
2 oz. unsweetened baking chocolate, chopped
2 tbsp. flour
pinch of salt
1 1/4 cups sugar
2 tbsp. light corn syrup
2 tbsp. coffee-flavored liqueur
1 1/2 tsp. vanilla extract
3 large eggs

Directions:
Crust:
Preheat oven to 350 degrees. Stir all ingredients together in a medium bowl until well-incorporated. Press mixture firmly against the bottom and sides of a 9″ deep-dish pie pan.

Pour half of mixture into prepared crust (and freeze the rest for more brownie goodness later, as stated above). Bake for approximately 30 minutes, until mixture is set. You might see some cracking, and that’s okay. 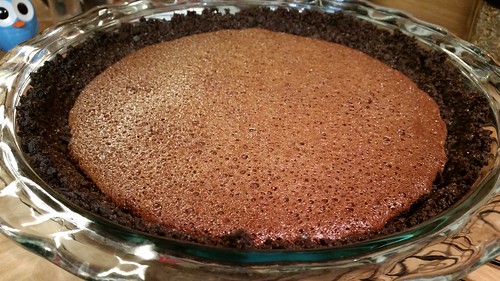 Cool for at least 2 hours before moving on to the next step. 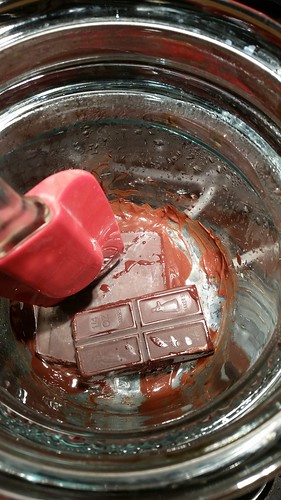 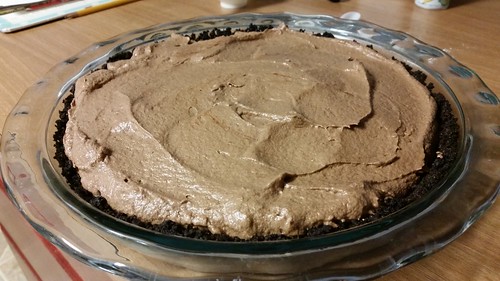 Refrigerate for at least 2 hours, while you make your cherry topping.

Cherry Topping:
Combine sugar, cornstarch, and salt in a medium saucepan and stir in water. 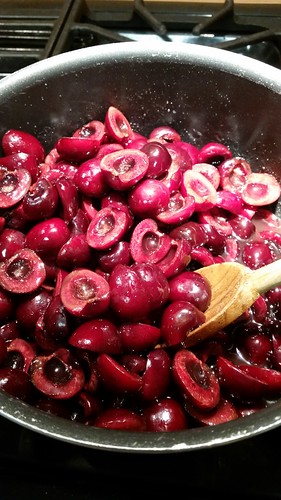 Add the cherries, and cook over medium heat, stirring occasionally, until sauce darkens and thickens to your preference. 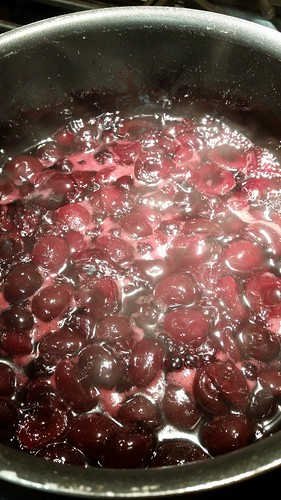 I really cooked it down, nearly 30 minutes, until it was super dark and purply and thick, almost like black cherries. Allow this to cool to room temperature while the pie is chilling.

You might have a whole bunch left over, so I made the sacrifice and did the research in order to tell you that it’s also freaking amazing on top of vanilla ice cream. 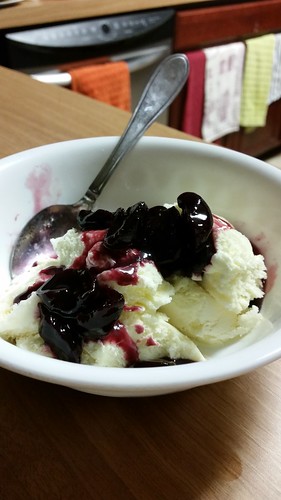 Just try not to eat it all before the pie is ready.

Finishing it Up:
When the pie is finished chilling and the cherries are cool, you’re ready to put it all together into a ridiculous tower of pie.

First, take the pie out of the refrigerator and let it sit for 10-15 minutes before cutting it while you make the whipped cream. Then, combine the whipped cream ingredients in a chilled bowl, and whip cream on high speed until fluffy and spreadable.

Cut yourself a slice of pie! You’re going to need a sharp knife and some patience to get that first piece out because of the thick layer of chocolate on the bottom, so take your time. Then, add a dollop of whipped cream and a spoonful of cherries.

It’s a super rich and chocolatey affair. After I made this, Dan said, “Why would you even bother making any other kind of chocolate pie? This one is all you need.”