I am very tired.

For the past eleventy-billion weeks, I have been heavily involved in my (hopefully) second-to-last semester of grad school, including performing my DNP project. And working. And writing a million papers. This may sound like complaining, but really, I think that I’ve earned the right just a little bit. It’ll all be worth it when I can make people call me Dr. Jinger, right?

Anyway, throughout all of it, I have still been working on a multitude of projects, mostly because my loved ones just will not stop having adorable babies and letting them grow up into adorable toddlers. It’s relentless. So, for the first of these “catch-up” style posts, I’ll be featuring two freaking adorable knitted items that I made for one of the super cute babies in question.

My wonderful friend Tobias and his girlfriend Alexis welcomed a baby boy in September, and because these are the dear friends with whom I lived out my D&D adventures for many years, I knew that I had to make them something that was both adorable and adventure-based. 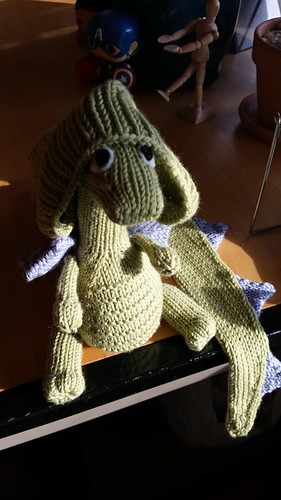 “Where thou go’est, weary traveler?” 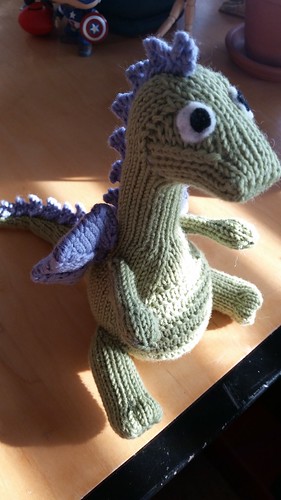 This sweet little guy was knitted up using the fabulous free pattern Tarragon the Gentle Dragon from Knit-A-Zoo, purveyor of all sorts of cute knitted animals. I loved the original name, but I definitely more of a sweet than savory person, so Cardamom it is.

This pattern really threw me for a loop while I was making it and putting it together, mostly because I just couldn’t get over how freaking cute all of the details were as they appeared. Like, there are little toe bumps on the dragon’s feet. 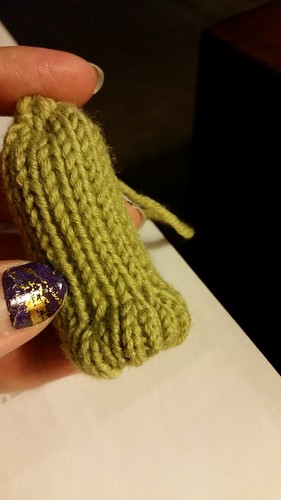 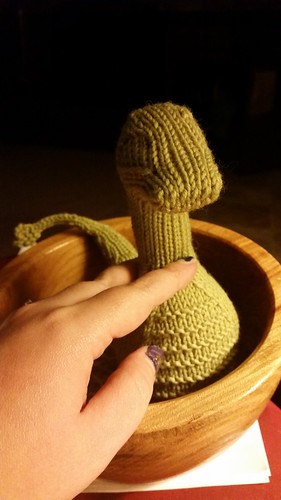 The shaping of the head alone gave it so much personality, even before the eyes and spikes got added. 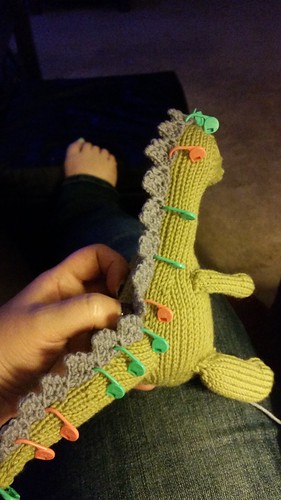 Although I had no idea what to expect when I started knitting that little purple strip of spikes (seriously it took me a minute to understand exactly how they would work, but, just trust the pattern, it knows what it’s doing), they sewed in so perfectly and were, by far, my absolute favorite part of the project. 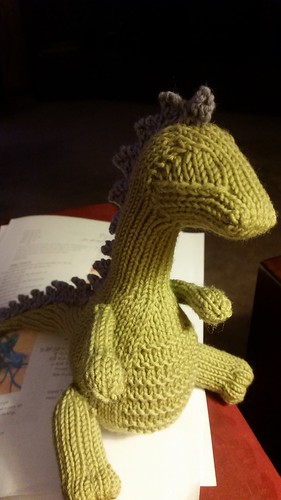 But, wait! The wings! 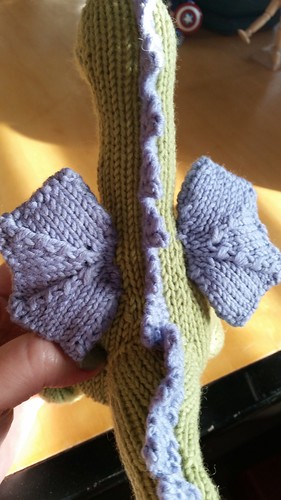 And his little tail! 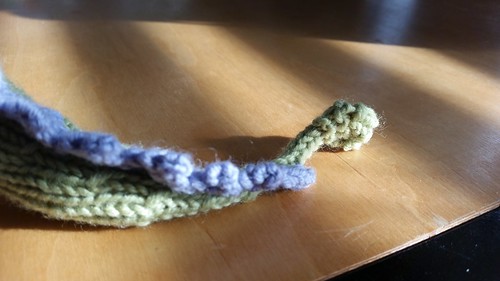 I didn’t really modify anything here, because everything was so perfect. The only thing I did was use my standard felt eyes, rather than the pre-made doll eyes suggested by the pattern, just because I want all of my handmade creatures to look a little bit sad for some reason. 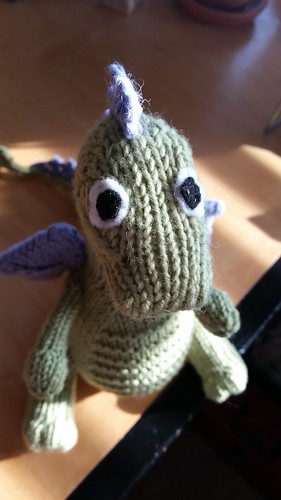 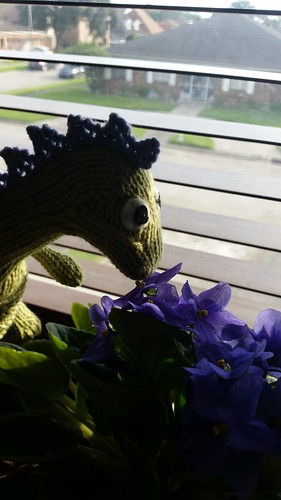 Now, I had plenty of yarn left over, and I knew that just a little dragon toy wasn’t enough, especially for a future adventure-baby, so I figured that I had to make a little bit of adventuring gear to go along with it.

What better than a little dragon hat to match his new dragon friend? 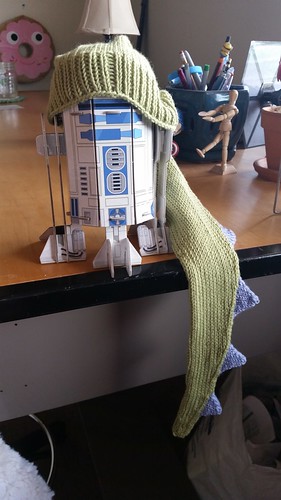 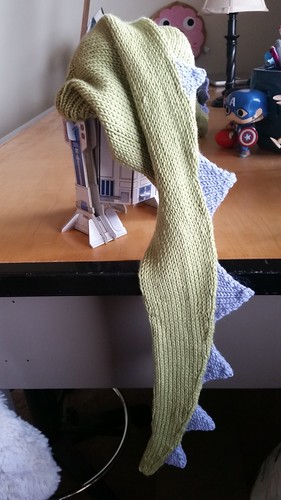 Modeled here so excellently by R2D2 is the Little Dragon Hat, made from the pattern Little Dragon by Fox & Crow. Fox & Crow’s website is a smorgasbord of cuteness and style, albeit all in Dutch, but do go give it a look and feel all kinds of knit-based envy. 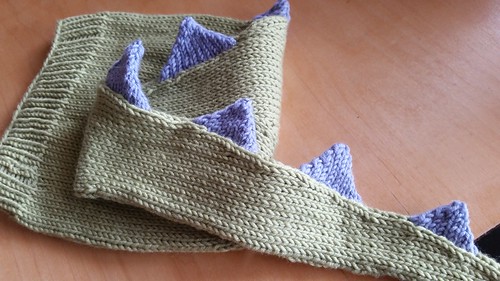 The overwhelming delight of being able to match the hat to the stuffed animal? Almost too much. 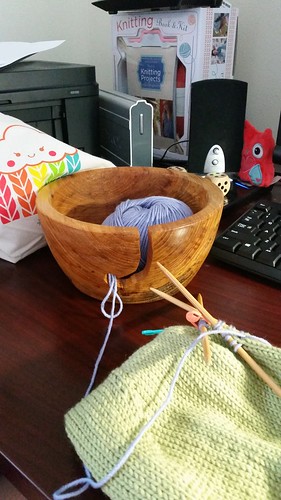 This one was so much fun, even during the little fiddly bits. I have to admit, somewhat sheepishly, that I originally attached the wrong color and knit 2 spikes in green before I realized that something was wrong. 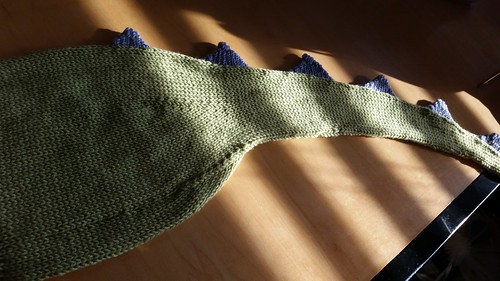 And then, after I was finished with all the spikes, I had to go back and undo and replace the very first one again, just because it was one stitch off from laying flat with the other ones, and it was going to make me go insane if I didn’t fix it. 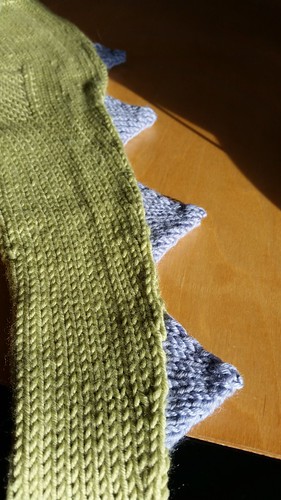 It was definitely worth it to get it perfect. The hat is a little (lot) too big for the baby right now, but I know he’ll get plenty of use out of it later, when he’s venturing out to explore his new world. 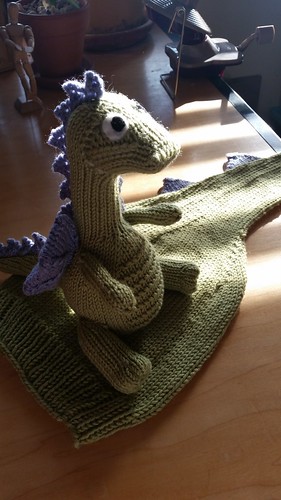 Don’t they make a charming pair?

I knit both of these with Debbie Bliss Rialto DK, but really any DK- or sport-weight yarn would work wonderfully, as long as it’s not too high on the acrylic/viscose/whatever-plastic content. I only say this because you need to do a fair bit of ironing for the dragon’s spikes and for getting your hat spikes perfect and pointy, so you don’t want something that’s going to melt or get weird and shiny. Rialto is a 100% merino with a very fine multi-ply structure, so you get really good stitch definition.

For these projects, I managed to make both out of 3 balls of Apple and 1 ball of Wisteria, but now that I think about it, I don’t even think that I touched the third ball of the green. August seems like forever ago, you guys. Stay tuned for more catch-up posts as I try to piece back together a year that felt like it took 3 years to pass.

1 thought on “Catch-Up Time: Cardamom, the friendly dragon, and the Little Dragon Hat”