My boyfriend Dan is extremely picky? discerning when it comes to knitwear. 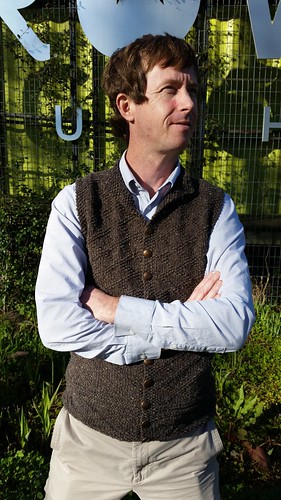 It can make making things for him somewhat challenging, but after being together for 10 years, you learn how to make things work. He has very strong opinions about vests in particular. They have to have buttons. They have to be all one color. They have to have a stitch pattern, but it can’t be cables or anything too too fancy. They have to look good with blue button-down shirts. 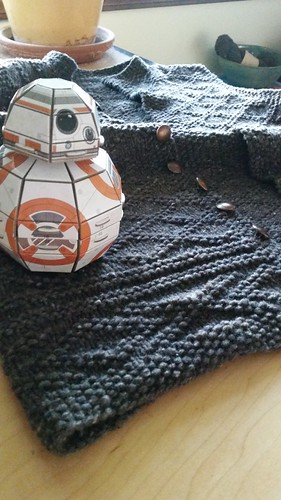 They have to be BB-8 approved.

Okay, maybe I made that last one up.

Point is, there are a lot of rules. And how do we get around this, being the incredibly patient knitter that we are? We make Dan pick out every single aspect of the project. We sit together for two hours on Ravelry, going through every single listed knit vest pattern for men, until it is narrowed down to only one. 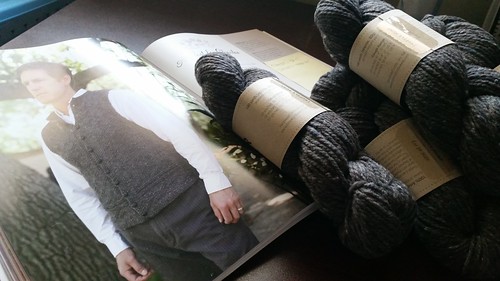 The winner? A Vest for Charles by Kathleen Dames, from The Best of Jane Austen Knits. This one ticks every box up there: buttons, all one color, an unobtrusive but lovely brocade-inspired stitch pattern…perfection for the picky man. 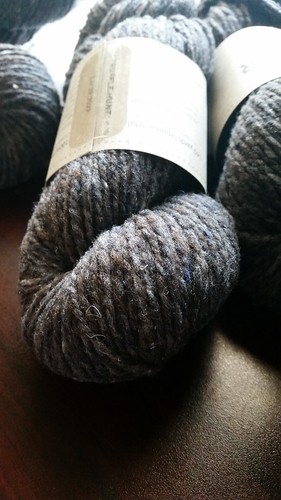 The yarn? Well, this is the first time in my life that I have ever done this, but this project is knit in exactly the same yarn and colorway as pictured in the original pattern, Brooklyn Tweed Shelter in the color Truffle Hunt. (Click the link to buy some from Loop! They were super fast and super friendly! Highly recommended.) I gave Dan several suggestions as to other worsted weight yarns and tweedy options, but he had his heart set on the exact one in the picture. 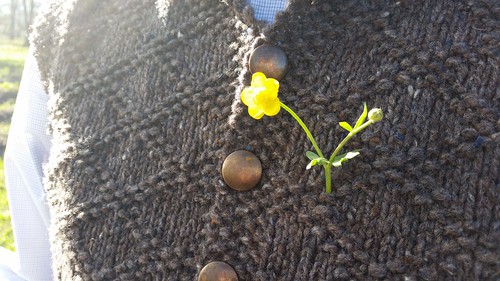 And you know what? He couldn’t have been more right. Truffle Hunt is a gorgeous color, somewhere between gray and brown (as you can probably tell from the fact that it looks like a completely different color in almost every single picture), with tiny flecks of teal green, dark blue, gold, brown, and white interspersed throughout. And because Shelter is what’s called a “woolen-spun” yarn, it’s very soft, light, and airy, while somehow also providing amazing stitch definition and warmth. 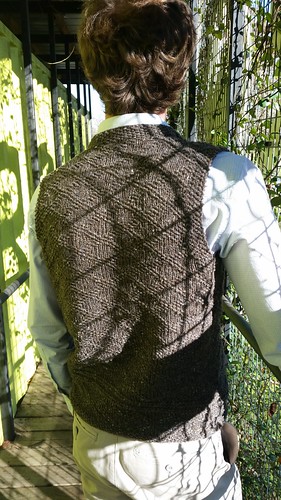 I mean, look at all that double-diamond action. I’m definitely going to invest in some more when it’s time to make a sweater for me. 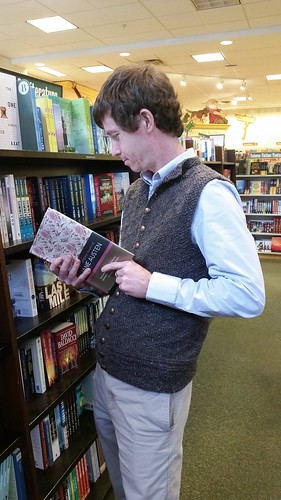 Jane Austen Knits is a really fun book for those who are into regency-influenced fashion, so I felt like I needed to get a picture of Dan enjoying a bit of Persuasion. Fitting, as it’s the character Charles Musgrove for which the pattern is named. 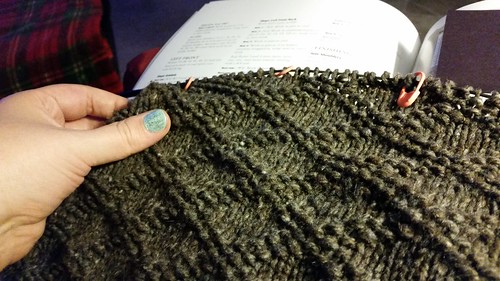 As for the pattern, although it’s absolutely perfect for my slender, just made-for-an-ascot-looking counterpart, it has its ups and downs. The charts are easy-to-follow, but more complex than they appear at first glance. Keep your stitch markers going (even though it’ll seem ridiculous at first) and take plenty of notes as to where you start and stop for each section of pattern when you get to dividing up for the sleeves. You’ll thank me later. 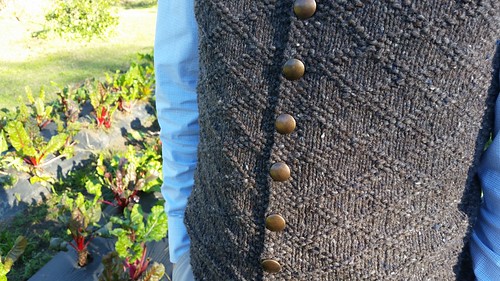 Keep close track of your buttonhole rows, because they don’t line up with the stitch pattern at all, even though in the finished project, they look like they do. 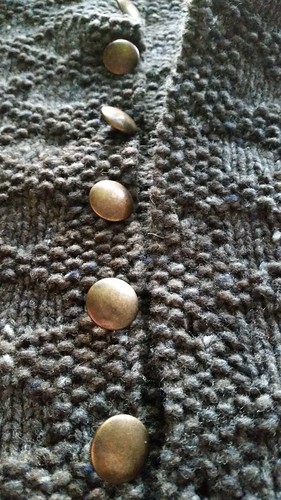 Speaking of buttonholes, this is actually one of the things that I thought was really marvelous about this pattern. While you’re knitting, you knit in buttonholes on either side of the chest closure at the same time, resulting in doubled matching buttonholes all the way up. This is for two reasons: one, so that the vest can be unisex and you can choose for yourself which side to sew the buttons onto; and two, so that when you are ready to sew, you know exactly where that button is to be placed, down to the exact stitch. 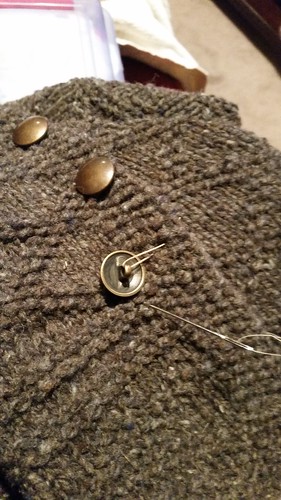 It’s not super easy to see, but the post on that button is going to land directly into the yarnover, which matches exactly with the other side. I know that all knitters have had that moment where, no matter how well you measure and mark out your buttons and pin out everything perfectly, the buttons never, ever look exactly evenly spaced. I’m so happy to know that there’s a solution to that problem. 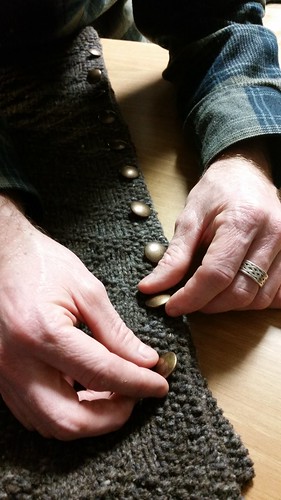 The buttons? Dan picked those out, too. Well, more like he was guided into choosing them by the amazing staff at Promenade Fine Fabrics on St. Charles Ave. here in New Orleans. If you go to their website, the fantastic man who helped us is the owner, Herbert Halpern, the distinguished-looking gentleman on the left in the photo at the bottom right corner. He came right over to us, picked up the vest, steered us away from the wooden buttons, and found the absolute perfect match. Dill 1942 Full Metal, style 6486, if you’re wondering. 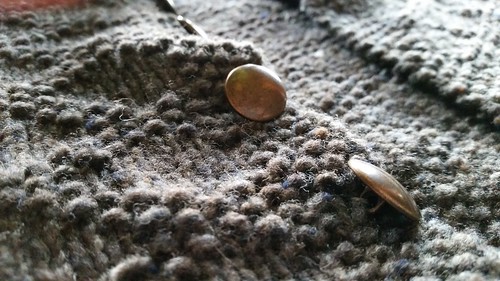 They’re just exactly the right mix of modest and military. And just like the yarn, they change color depending on the light. I ended up using 13 buttons instead of the 11 called for in the pattern, because even though I made the 36″ chest circumference size, Dan’s torso is really long in proportion to the rest of him. The result? A super-flattering slim fit that makes him look taller. And even though I made the vest that much longer, I still somehow ended up with an extra skein of yarn left over. Maybe a hat to match? Or an ascot? 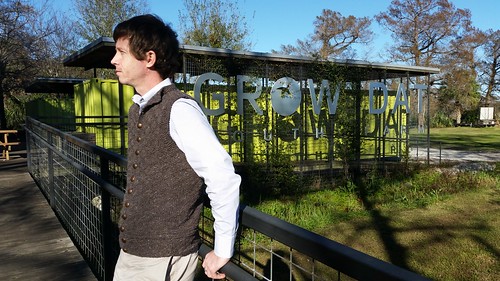 Last, but not least, Dan got to pick out our photo shoot location. Grow Dat Youth Farm is one of our favorite places in the city. 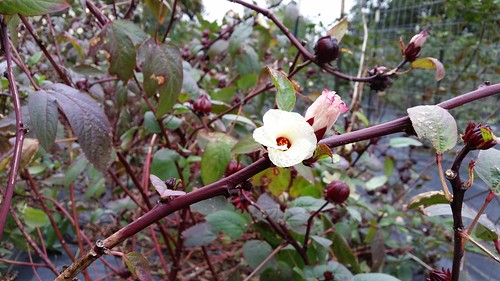 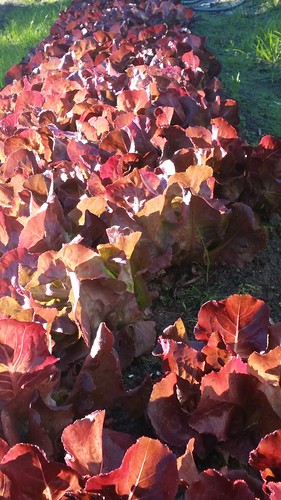 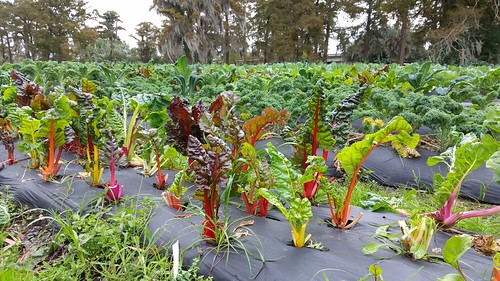 They teach kids all about sustainable agriculture and sell their food through farm stands and CSA boxes throughout the year. We finally became CSA share members this year, after debating for some time, and we’ve been having a lot of fun so far preparing the seasonal vegetables that they provide. 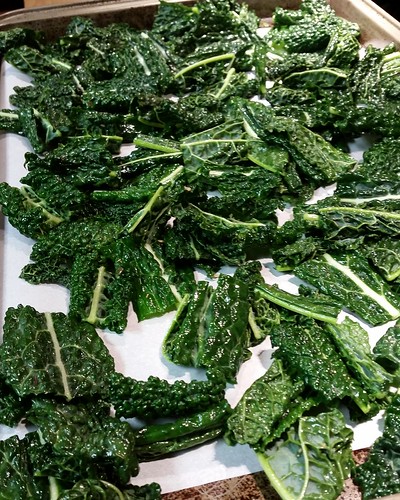 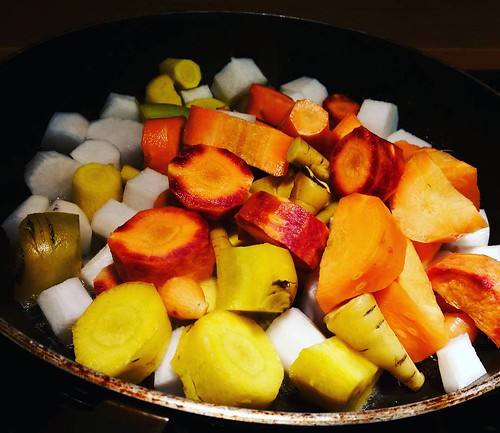 I am all about those purple carrots now.

So, if your boyfriend wants to show off his brand-new sweater vest by running around in a field of greens that you’re probably going to eat later, you let him. 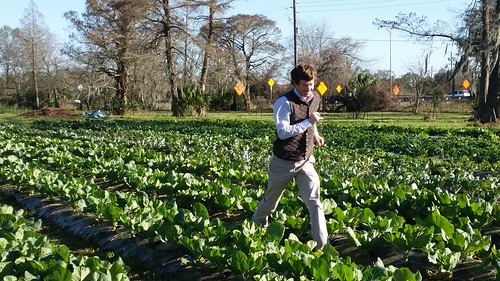 4 thoughts on “A Vest for Dan”