I appear to have acquired for myself a reputation for making boozy desserts. I have absolutely no idea how that could have possibly happened. 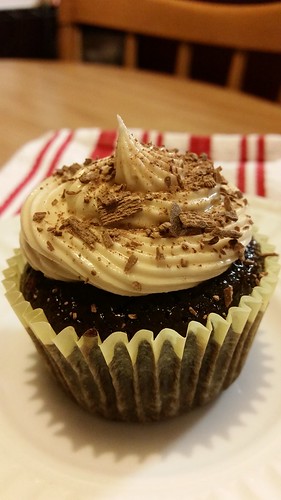 My friend Samantha recently moved away from New Orleans to Chicago, and for her going-away party, I asked her if she’d like for me to bake anything. She said that she didn’t care what the baked good was, as long as it was filled with alcohol, preferably White Russian-flavored. 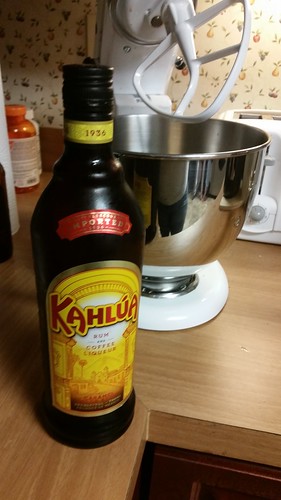 I was prepared with a ridiculous amount of Kahlua, but, as usual, some research was in order. I was going to be bringing this dessert to a bar (appropriately enough, considering the contents), so it couldn’t be some sort of giant cake or frozen thing. Cupcakes seemed portable and appropriate. Clicking around brought me to the Collegiate Baker‘s Chocolate Kahlua Cake, a thing of beauty that absolutely begged to be modified into cupcakes. 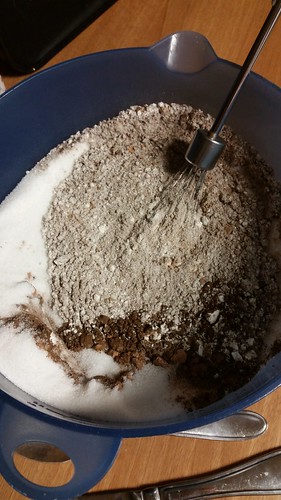 All of the elements were there: chocolate, Kahlua, and even more Kahlua. 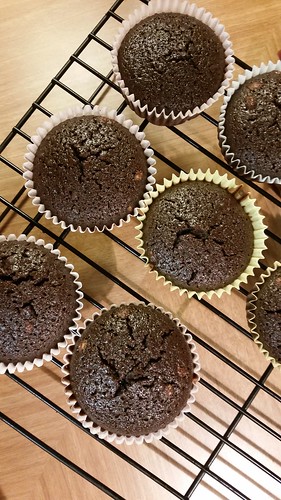 As for the cupcakes part, the only modification that I made was to divide the batter into liners in a cupcake pan (obviously), and baked them for a slightly longer period of time (about 33 minutes, as opposed to the 25 in the original recipe). I’m not sure if the longer time comes from a slightly taller cake or from the fact that my oven is a lying liar all the time, but things worked out nicely.

Just a note, you end up filling the cupcake liners slightly higher than you think you need to because these don’t rise very much at all. Just go a little bit higher than the standard 2/3rds, and you’ll be just fine. You’ll get 18 cupcakes, plus a tiny 1/2-sized 19th cupcake just for you to enjoy. 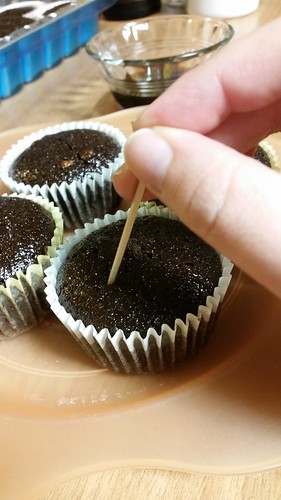 This tiny half-cake ended up being super important to the process here. Dan and I split it when the cupcakes had cooled sufficiently, and we discovered that, although the chocolate and coffee liqueur flavor was pleasing (that’s too weak of a word…it was freaking dense and delicious), it was not what you’d call boozy really. It didn’t have that little bump of tang and flavor that I’ve come to associate with those types of desserts.

So, after the cakes were totally cooled, I went ahead and remedied that by poking a bunch of holes in the top of each cupcake… 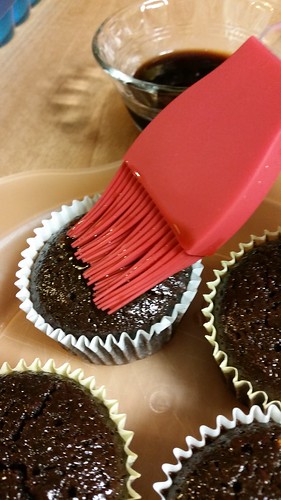 …and brushing them with straight Kahlua to soak in. Each one got a good, full brushful, plus some extra drops drizzled into those gorgeous cracks on top. I think I used slightly less than 1/2 cup for all 18 cakes.

Then, I let that soak in while I made the frosting. 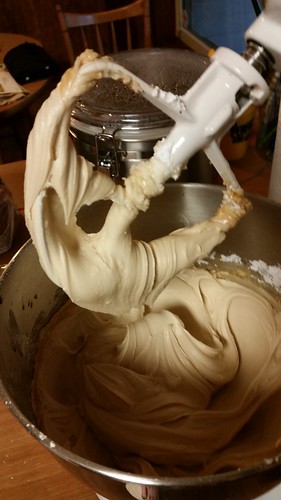 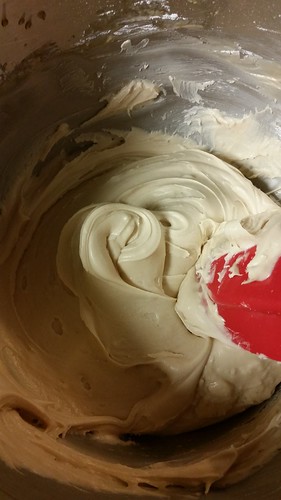 It’s ridiculous how good this stuff is. And a warning, you’ll end up with way too much for just cupcakes, unless you are some kind of champion cupcake decorator who knows how to pile that stuff up way high. I think that I probably only used about half of the recipe, and the other half is currently sitting in my refrigerator, calling to me softly every time I walk by. 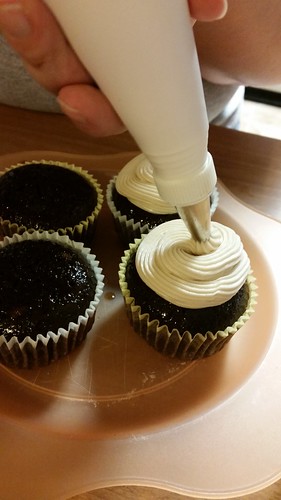 Now, I am intimidated by frosting cupcakes. But if you are a close reader, you are probably not surprised by this information. This time, however, I had the frosting mojo. I was on a roll, making perfect little spirals with perfect tiny curls on top. 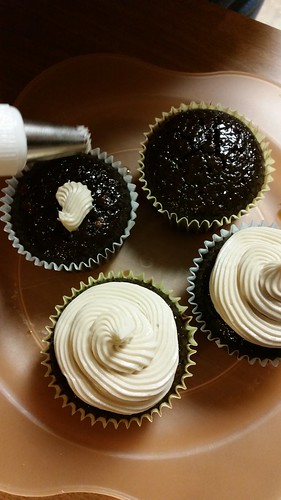 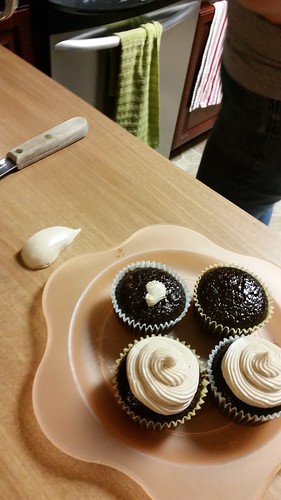 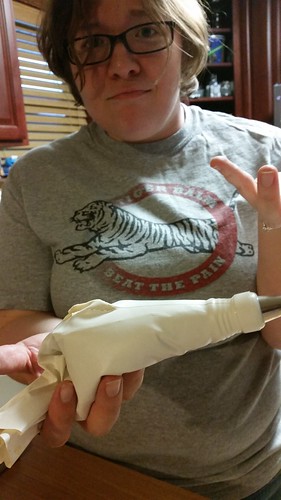 My frosting bag betrayed me. Split right up the side. And then at the tip while I attempted to salvage the existing frosting and rescue the tip. While I scrambled to rig up a Ziplock bag to save the entire operation and not lose the frosting mojo, Dan took some artistic shots. 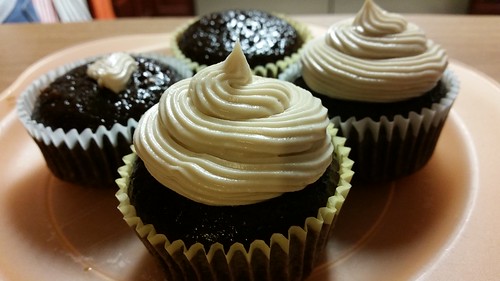 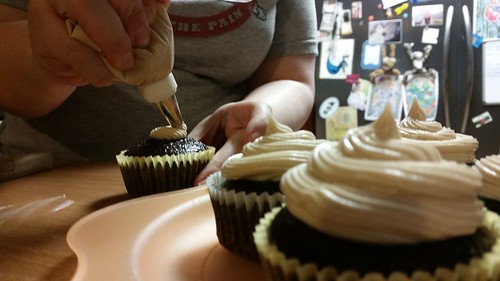 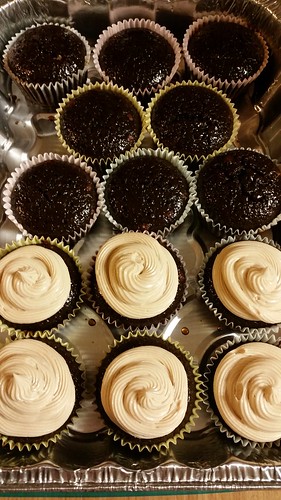 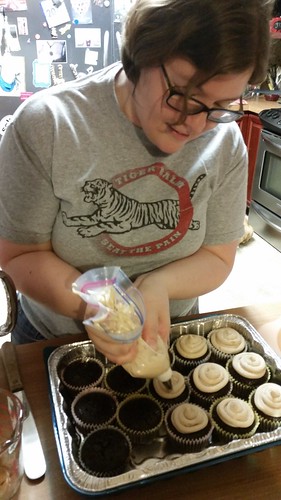 I was even smiling, and you know that rarely happens in my kitchen. 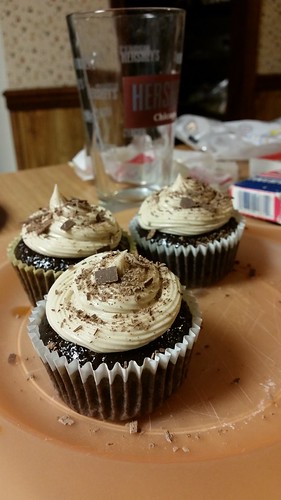 Then, for the finishing touch, everything got sprinkled with some bittersweet chocolate shavings. You could make some chocolate curls for yourself, or you could go with my cheating, hacky version and buy some super fancy hot chocolate from Williams-Sonoma and use that instead. It’s delicious sprinkled on top of ice cream, too. 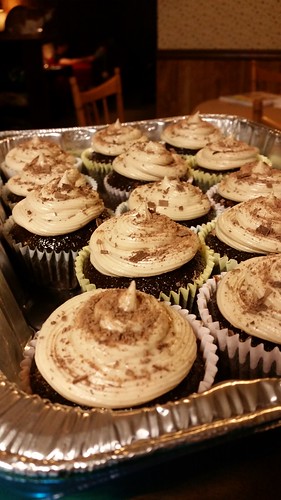 Hooray! I sent out the call on social media for friends to help me with the name for these, as I couldn’t think of anything that was remotely clever or didn’t sound exactly like every other cake on the Internet. There was so many funny and interesting suggestions, but what really stuck out was how many people mentioned The Big Lebowski and the Dude.

I kicked myself for not thinking of that first, and then used elements of a bunch of suggestions to come up with Little Lebowskis, after the urban achievers in the film. And proud we are of all of them. (Do it in your best Maude voice.) 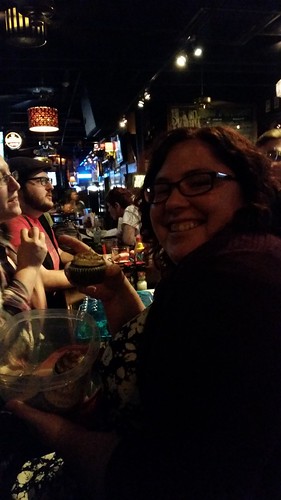 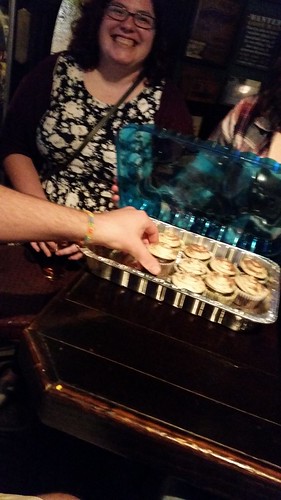 Sam became the keeper of the cupcakes once they appeared at the party, and her smile makes me think that I did a pretty good job. 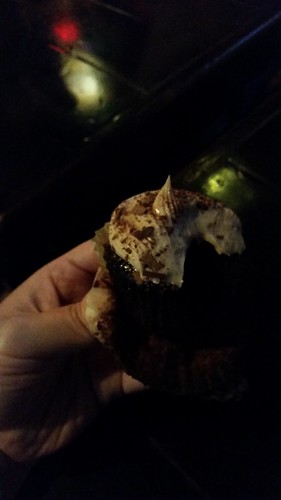 I know that the quality of these pictures is bad, but bars are dark and no one else in the world cares if you like to take pictures of your food.

Anyway, the first bite of these is super dark chocolate and sweet buttercream. Then, the Kahlua kicks in and warms everything up, and makes everyone make the same simultaneously surprised and satisfied face. I’m going to have to make them again to use up all that extra frosting.