On Tuesday, Joy the Baker had a book-signing here in New Orleans before she started on her book tour for her new offering, Homemade Decadence. 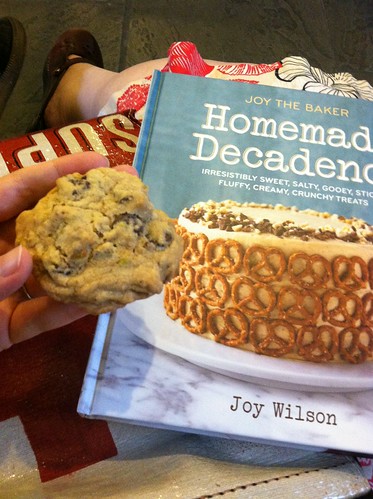 No one who reads this blog, or reads any food- or baking-oriented blog (or maybe any blog ever) should be surprised to know that I have a fairly serious girl-blog-crush on Joy the Baker. Doesn’t everyone? She makes absolutely beautiful food, blogs about her mistakes, has a feisty orange cat, and rocks cool tattoos and glasses. She might be who I want to be when I grow up (and perhaps who my blog personality thinks that I actually am), even though she is only 1 year older than me. She just recently moved here in January, and I am so glad that she’s here in my hometown to enjoy the food and weirdness along with us, although I am extremely jealous of the amazing morning light she gets in her French Quarter kitchen. 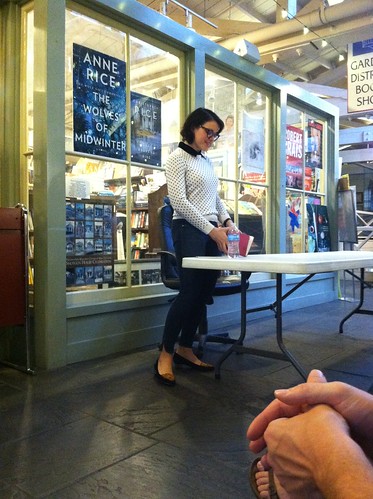 For her book-signing, I decided to continue my self-imposed tradition of bringing small knitted objects to famous people that I feel have influenced a part of who I am. Perhaps you might remember when I gave David Sedaris an owl? Or attempted to bring Eddie Izzard a squirrel? Well, this time I decided to bring Joy the Baker a present, but it was for her lovely orange cat, Tron-Cat, who makes the occasional appearance on her blog and whom I decided needed a little bit of knitted love. 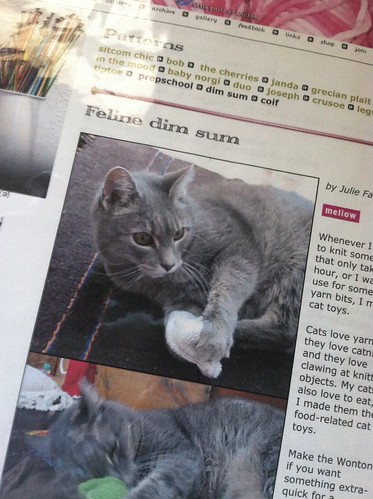 Unfortunately, I made this decision on early Tuesday morning, and then had to wait until I was finished with class, and forced myself to rush home as fast as possible to knit an eggroll. That’s right, an eggroll with catnip. The pattern is from the Spring 2003 issue of Knitty, Feline Dim Sum by Julie Falatko, and it is so freaking cute that I can’t stand it. 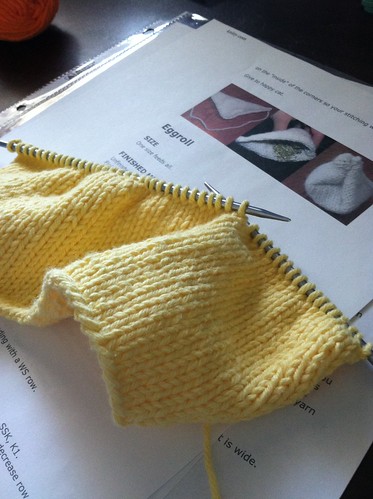 I love how that picture of the wonton toy stuffed with catnip looks so illicit up there. 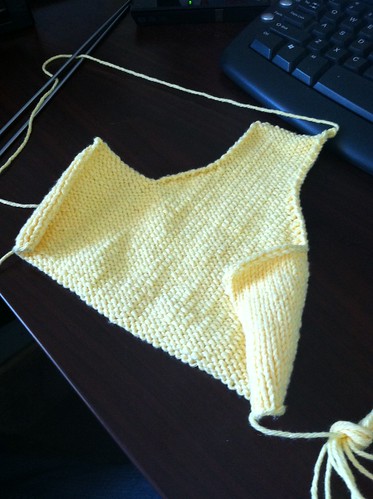 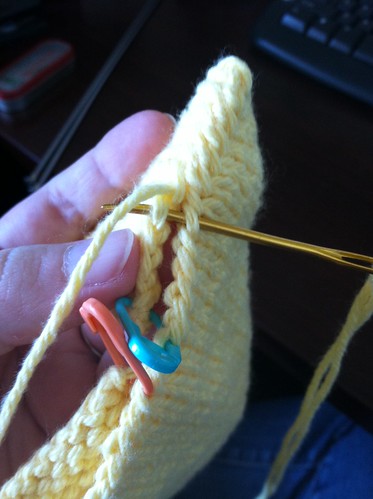 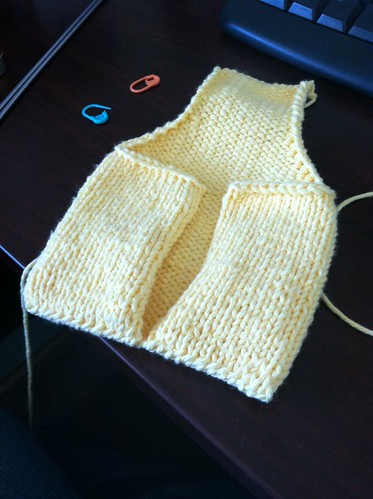 I had previously used this pattern in 2004 to make some little toys for my brother’s cat, Chunky, and it was only about 5 minutes before she discovered how to bust open the eggroll and regale herself in catnip all over the floor. Slight adjustments had to be made. 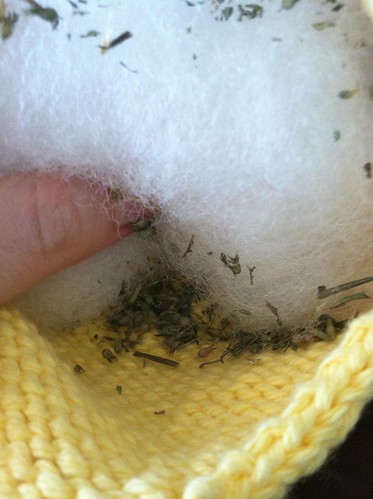 It’s only catnip! I promise! 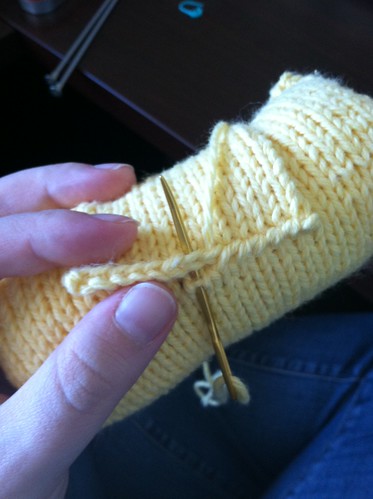 In order to keep things super secure in there, I first stitched down the flap as instructed, although I did it extremely crookedly for some reason. Let’s chalk it up to nerdy excitement and being pressed for time. 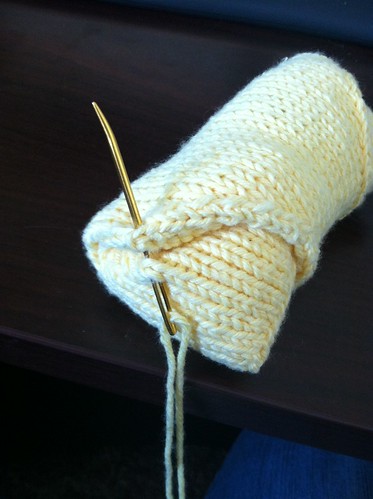 Then I tacked down the corners of the top of the flap, just for good measure, running the yarn along the top for a few stitches… 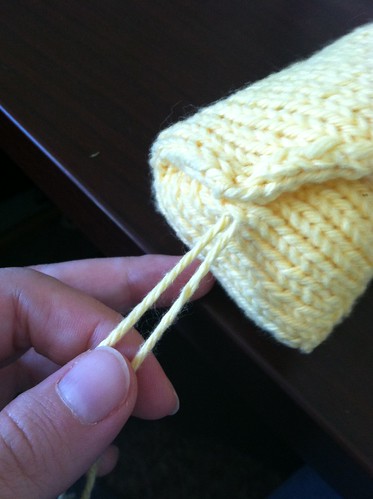 …then pulling it back down and tying it into a knot… 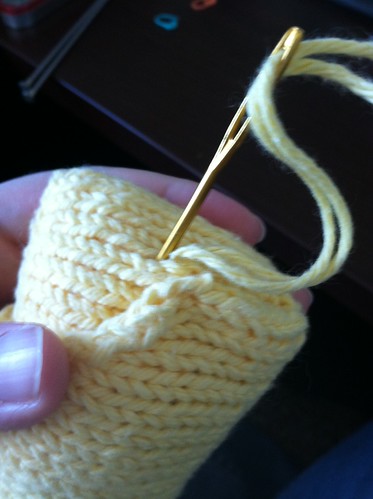 …and finally threading the ends through the middle of the stuffing to hide them. I left all of the ends long inside there in order to prevent any accidental, or cat-rage influenced, unravellings. 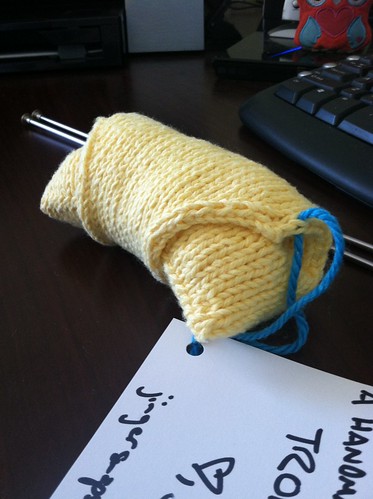 Then, it got a label and was photographed. Notice how I suddenly had the presence of mind to let the recipient of one of these gifts know my name and the name of my blog? After the Eddie-Izzard-and-Jeff-the-Squirrel debacle, I’m never not shamelessly self-promoting again. I managed to get everything done in 2 hours and 15 minutes, with just enough time to pick up Dan and head to the bookstore. 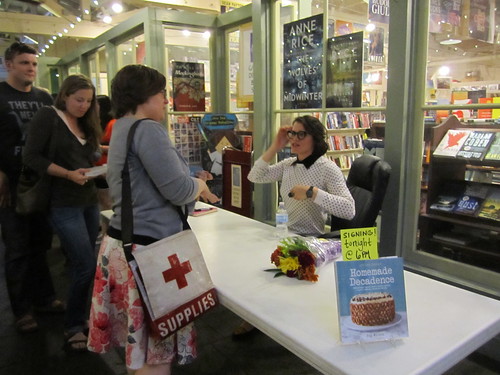 I’m pretty sure that this is the moment when I said, “I have a present that I made for you, but it’s not only for you. It’s for your cat.” Notice the adorable confusion? This was the intended effect. 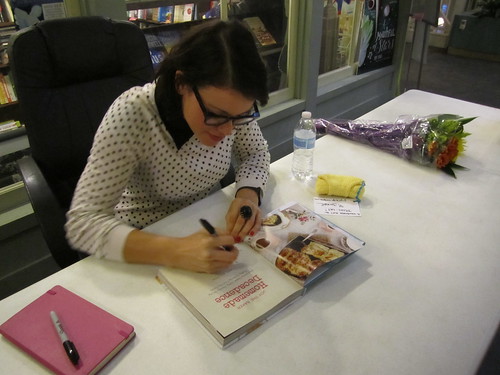 She told me that I couldn’t possibly be for real, but she seemed delighted all the same. 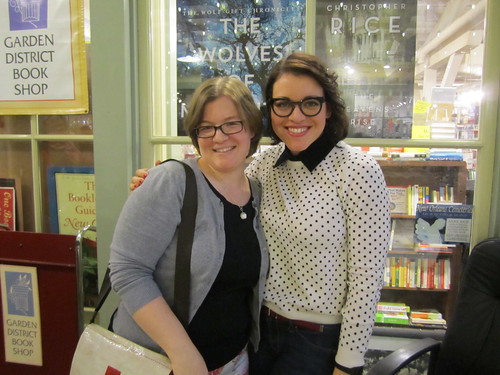 I know that I was. 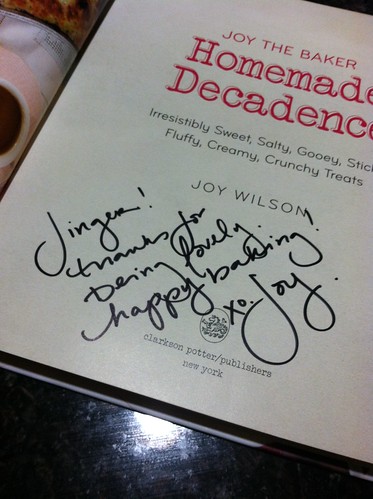 She was also super funny and adorable in person, just as I suspected. I managed to keep my fangirl-type tendencies in check as much as possible, and somehow didn’t embarrass myself or trip over my shoes the entire time. A triumph of the human spirit.

And can we talk about this amazing book? It’s got so much fantastic stuff in it (so many ice cream recipes!) that I haven’t even been able to properly absorb it yet. My winter break from school will certainly be filled with delicious things because of this wonderful lady. Joy, thanks so much for being lovely, too. Don’t ever stop making people happy. Good advice for everyone, really.

2 thoughts on “I met Joy the Baker and gave her an eggroll. True story.”