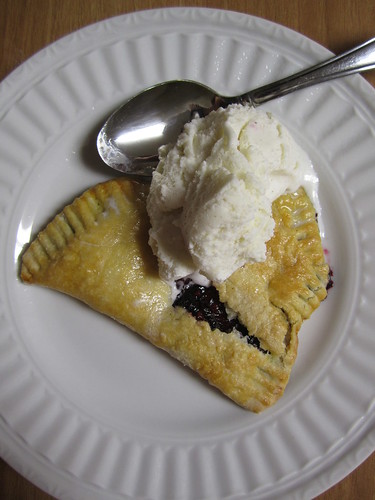 Dan and I got into a small debate last weekend with some friends as to whether cake is better than pie. Dan and I fall firmly down on the “pie” side, which might be one of the defining reasons for our eight years together. I’m sure other factors play a part, but they surely can’t be as important as pie.

Cupcakes, with their beneficial frosting-to-cake ratio were mentioned during this debate, and I countered this argument with the existence of hand pies. Or empanadas. Or turnovers. Or whatever you want to call these wonderful little single-serving treats that give you an amazing crust-to-filling ratio that blows a cupcake away.

People who grew up in New Orleans (like me) also grew up on Hubig’s Pies, these amazing deep fried sugar bombs that always made an appearance at every family function in my childhood. (I have an aunt who used to work in their corporate office, and it was always her potluck contribution to bring an entire case of assorted flavors.) Unfortunately, Hubig’s suffered a devastating fire in 2012, and the factory has yet to be restored. That leaves those of us firmly entrenched on the “pie” side without some of our favorite things.

How do we fix this problem? We make our own. 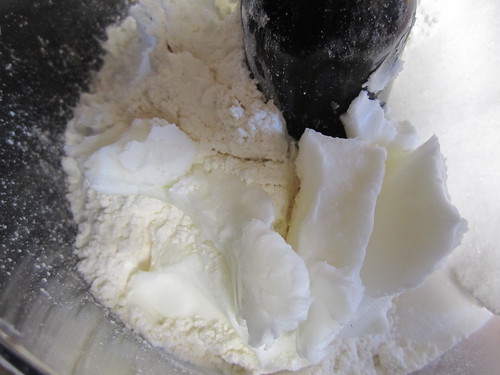 We get out our new ice cream cookbook, Jeni’s Splendid Ice Cream Desserts, turn to the page with the recipe for Sweet Empanadas, and get to mixing up some dough. 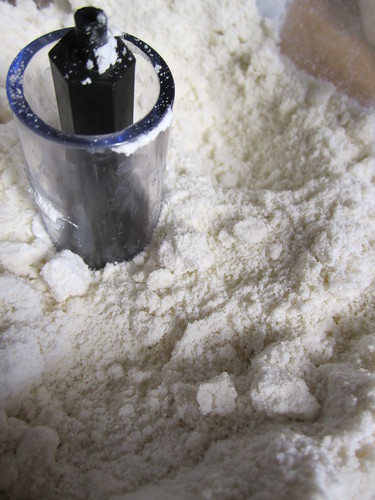 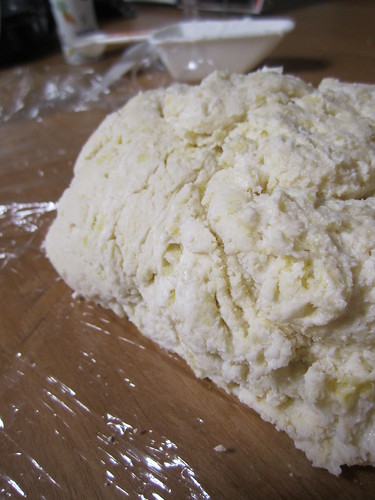 Jeni’s has been encouraging people to take the recipes in the cookbooks and run with them, putting their own spin on things or creating new flavors, something they’ve dubbed Freestylin’. #freestylin if we want to be super-cool. 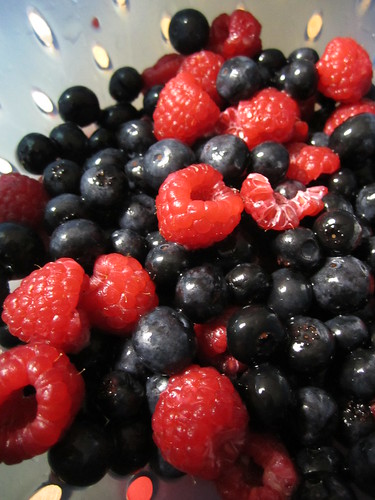 When I was asking Dan about what flavor of hand pie he’d like, he specified raspberry. I was in more of a blueberry mood. What to do, especially since we’re in freestylin’ mode? Mix them together. 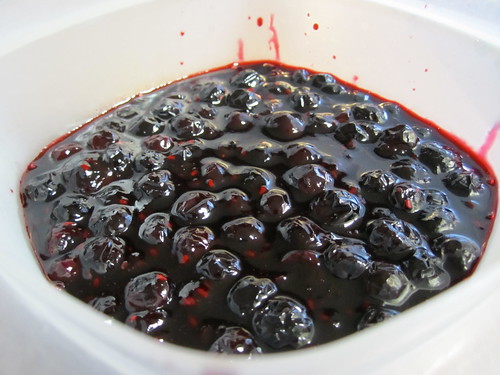 Raspberries and blueberries cooked down into a delicious syrup makes the most beautiful deep magenta that I’ve ever been able to produce in my kitchen. 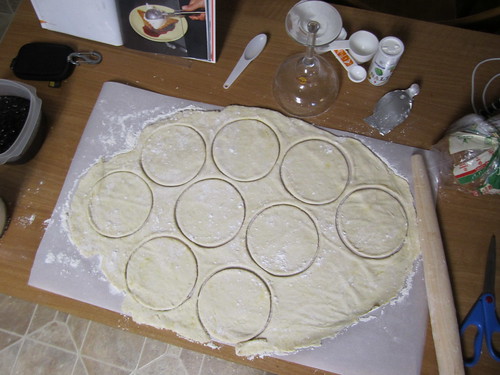 I cut my circles out of my dough, using a Hard Rock Cafe cocktail glass that I have never used once for alcohol, mostly because of its cartoonish shape. 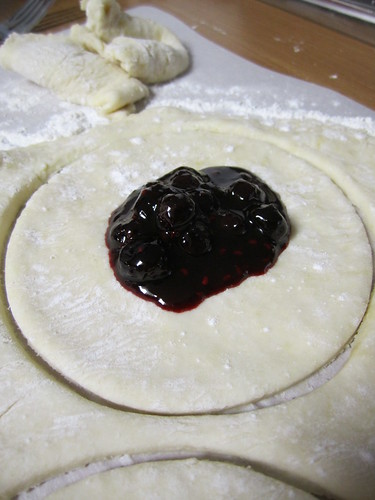 And because I didn’t have any troubles with the dough, I was bound to run into problems sooner or later. The recipe recommends 2-2 1/2 tablespoons of filling per pie, but I could barely fit in one without having problems sealing the dough. 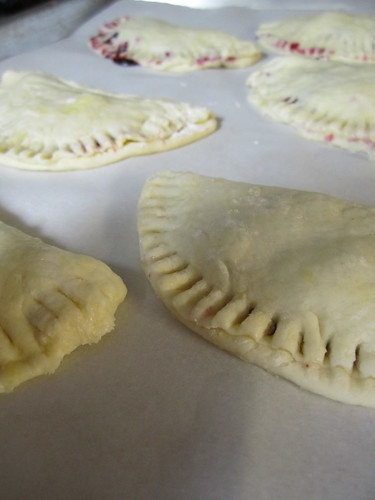 See those ones in the back spilling their purple guts already? I think that I might need to invest in an empanada press. Then, the oozing might not have been so…oozy. 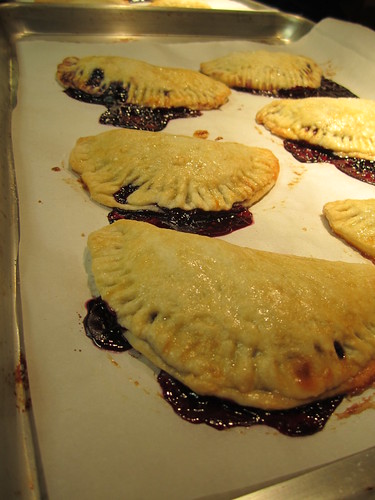 Because we were freestylin’ (and slightly because I am still moderately terrified of boiling oil), I decided to bake the pies instead of frying them. Everything got brushed with eggwash and sprinkled with some extra sugar. Then, they went into a preheated 375 degree oven for about 35 minutes, switching places and turning halfway through.

Even though oozing did occur, however, the pies stayed fairly plump and didn’t lose the majority of their fruity filling, so things worked out in the end. 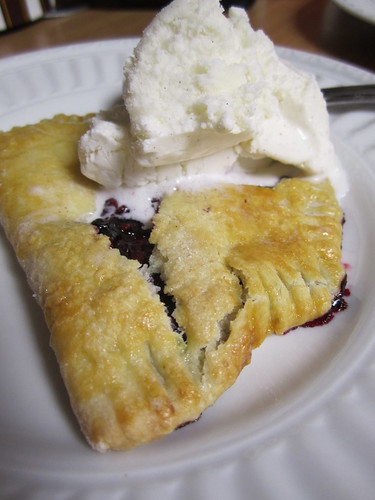 Especially when we scooped some vanilla bean ice cream (tragically not handmade) on top, as per Jeni’s suggestion. 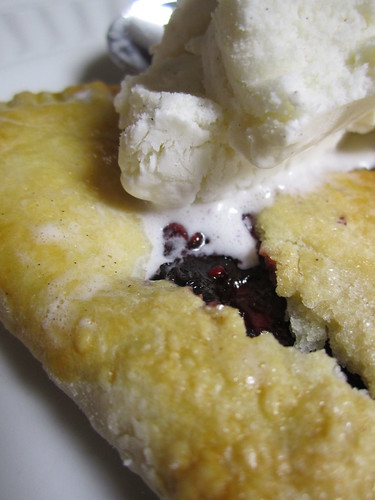 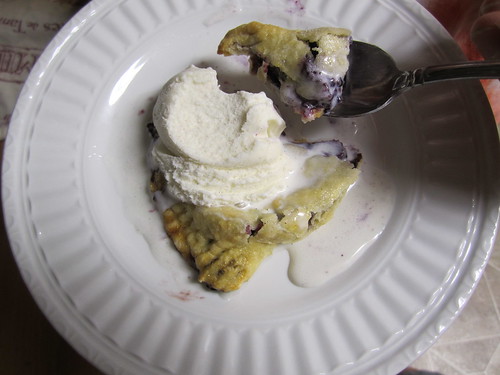 The pies have only been in existence for two days, and they are already more than halfway gone. I should have doubled things up, clearly. Or maybe we just need Hubig’s back ASAP. Either way would be a win for us “pie” people.